Sebastian in other languages

When Platinum was little, Sebastian helped her in reading lots of books, to improve her knowledge.[1] To prepare for Platinum's journey, Mr. Berlitz arranged two bodyguards to protect her. He had Sebastian give them a red and green muffler, so his daughter could identify them.[2]

Sebastian was working in Platinum's manor. He brought Platinum some clothes to wear, and complimented her appearance. However, he begged Platinum to stay, referring to as missy, as she was preparing for a journey. Platinum laughed, promising she'd return, but Sebastian warned her of the dangers on the path. Platinum reminded him of the bodyguards that would protect her, but Sebastian was still displeased. Still, he noted the two bodyguards would lead her to Mt. Coronet, who were supposed to be waiting at Jubilife Building, wearing red and green scarves. Platinum understood and departed, while Sebastian wished her good luck, and to be safe.[3]

A day later, Sebastian called Platinum, expressing his desire to be with her, to protect her.[4] Platinum didn't mind her butler, until she, Diamond and Pearl encountered a Luxio. Luxio growled at them before disappearing into the grass, and Platinum realized that her butler was right to have hired bodyguards to protect her.[5] After hearing that her father had been abducted, Platinum called Sebastian from Fantina's Gym, who confirmed these grave news.[6]

Sebastian encountered Diamond at Berlitz mansion. He assumed he was an intruder, since he knew all citizens of Sandgem Town, and Diamond was not one of them. To punish him, Sebastian's Weepinbell used Gastro Acid, followed with Chinchou's Water Pulse. A group of Tyrogue surrounded Diamond, who assumed the place to be a park. Sebastian claimed he was a liar, as this was the Berlitz estate. Diamond realized the estate belonged to Platinum, while Sebastian became shocked that Diamond knew her name. He bowed down, apologizing for assaulting Diamond, as he didn't know he was actually Platinum's friend, who accompanied her, ever since the two original bodyguards had disappeared. At the mansion, Sebastian tucked Diamond in bed, as he felt bad for attacking Diamond like that. He still felt disturbed to know Platinum was out there, and could be assaulted by the enemy at any moment. Diamond admitted he felt the same way, and asked about Professor Rowan. Sebastian explained he and his master, Mr. Berlitz, were recuperating at Canalave City. The two looked through the window, seeing Professor Rowan's assistant, Roseanne, taking care of the lab in the wake of his absence.[7]

The two noticed the lights flickering from Professor Rowan's lab. Sebastian assumed something was wrong, and Roseanne could be in danger. He had Chinchou flash some light to signal her, but Diamond reminded it would be better if they went to her. The two ran off, but Kit took the two and swinged from a branch, taking them in front of Professor Rowan's lab. Sebastian was impressed, seeing Kit was quite agile. The two went inside, and found Roseanne surrounded by many Yanmega, from which she was frightened of. Diamond noticed a machine, and confirmed Sebastian's hunch, for these Yanmega have been sent by the villainous Team Galactic. To stop them, Diamond and Sebastian resolved themselves to defeat the Yanmega. Unfortunately, the latter emitted a shock wave, which defeated Sebastian's Weepinbell.[8] Fortunately, Diamond managed to get into the swarm of Yanmega and destroy the machine, which made the Yanmega disperse. Sebastian applauded him for the success, and became interested in the way he was thinking, to protect himself from Yanmega's attacks. Since Diamond's clothes got cut from Yanmega's attacks, Sebastian went to get some new ones. Diamond refused, and explained he was going to the adjacent Twinleaf - his hometown- to get some new ones.[9]

Sebastian and Roseanne went on the carriage to Twinleaf Town. Roseanne wanted to speak with Diamond, as she feared a great danger would threaten Sinnoh soon, considering what had happened last night. The two knocked on Diamond's door, but Diamond quickly rushed out before they could even react.[10] They went to Lake Verity, where they had a meal and discussed which course of action they should take next. Diamond decided to have them stay away at the carriage, while his Lax, under the guise of a wild Pokémon, would take Johanna to them.[11] Roseanne and Sebastian were waiting for Johanna, which made Sebastian fear that something had happened. When Johanna came to them, they quickly went on the carriage and rode away.[12] Sebastian saw Mesprit coming out of the lake, from a distance.[13]

Johanna, Sebastian and Roseanne went to Diamond's house. The trio was safe, but wondered what happened to Diamond. Johanna noticed that Diamond took the shoes and coat she had bought, to which Sebastian and Roseanne confirmed that he had visited the house. Johanna was pleased, for she placed a phone inside the coat, and went to call Diamond. Diamond picked up the phone, which made the trio happy that he was alive and well. Diamond apologized to his mother for risking his life, to which Johanna simply asked him to come home, where he'd have the berry grill. Diamond refused, and admitted while he was with Mesprit, whom he was trying to protect, he was stuck in Team Galactic's air shuttle, which shocked the trio.[14] The group listened to Diamond, who swore to defeat these villains, and that was the feeling he shared with them.[15] The trio encountered Pearl at Route 212. Showing Diamond's Kit and Tru, Pearl assumed that Diamond has gone missing. Sebastian and Roseanne explained that he wasn't missing, but his mother explained that Diamond was in the air shuttle, which went to Veilstone City, much to Pearl's shock.[16] Sebastian and Roseanne introduced themselves to Pearl, and observed him going to Veilstone City on the bike that Rad Rickshaw had repaired.[15]

When Diamond confronted Cyrus, he remembered Sebastian and the rest of the people he met on the journey. He remarked that the space he travelled over, and the time he spent with the people he met were valuable to him.[17]

Platinum remembered Sebastian, who was kind to her, unlike Looker, who yelled at her to manage her Castle Points at the Battle Castle.[18]

Sebastian continued to serve as the butler to the Berlitz family, after the Team Galactic conflict was over.[19] 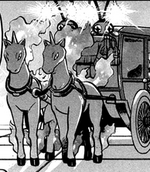