Surf, Dive
The Sea Mauville is a location in the Hoenn region. It only appears in Pokémon Omega Ruby and Alpha Sapphire, as it serves as the replacement for the Abandoned Ship from the original Hoenn games.

All items require Surf to be reached.

North of the ship

The northern exterior is accessed from Room 6, so Dive is required.

As it is accessed from the northern exterior, Dive is required. 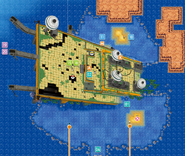 Exterior
Add a photo to this gallery
Retrieved from "https://pokemon.fandom.com/wiki/Sea_Mauville?oldid=1349341"
Community content is available under CC-BY-SA unless otherwise noted.