Scraggy is a small bipedal, lizard-like Pokémon. Its body is mainly yellow in color, with a red scaly belly; below the yellow portion of its head, its body is cream-colored. Scraggy's head is large and heavy, and they tend to headbutt. It has large, bulgy ovular eyes with black pupils that are set to the sides of its head. Its white teeth appear to be constantly exposed, giving it a grinning appearance. It has two tiny nostrils above its grinning mouth. There is a small red scale atop its yellow head. Scraggy has loose, yellow shed skin around its legs, resembling baggy trousers. Some of the loose skin around its legs to trails off to form or cover its tail. Scraggy's shed skin “pants” are very elastic and can be pulled up to its neck, which enables it to reduce the damage it takes from attacks. Shiny Scraggy is slightly darker in color.

Scraggy live in small groups. They have a habit of headbutting, and will headbutt anyone who makes eye contact with it. They are even known to greet other Scraggy by headbutting, as a method to test their strength. In order to defend itself, a Scraggy will pull its skin up to its neck. Scraggy with baggier skin garner more respect amongst their peers.

Scraggy evolves into Scrafty at level 39.

A Scraggy is the Pokémon that hatches from Ash's egg in Scraggy—Hatched to be Wild!. Ash's Scraggy is considered to be a "wild child".

Scraggy is based on a lizard that is shedding its skin with its "pants" being the skin. Its baggy pants may also draw inspiration from stereotypes of youth delinquency and various related subcultures. Being a lizard also ties into this aspect, as lizards grew in popularity as pets in the 1990s for being "off norm" and were further popularized by the lifestyles of celebrities owning exotic pets, especially by their ownership and care under Guns N' Roses lead guitarist Saul "Slash" Hudson. 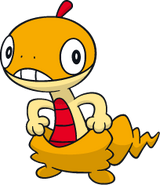 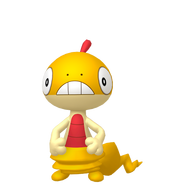 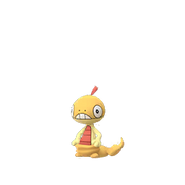