Scorbunny looks like a small white rabbit with reddish-orange patches at the tips of its ears and feet and light yellow rectangles both on its face right between the eyes and the soles of its feet. It has short stubby arms with small 3-fingered hands. Its legs are long with small fluffy feet with 3 toes each. Around its neck is a small red collar-like ruff. Its head is larger than its body and features tufts of fur on its cheeks. In the back is a small poof-like tail.

Scorbunny is always bursting with energy. It uses its agility and natural kicking skills to confuse opponents. According to the anime, a Scorbunny's foot is said to bring good luck, a reference to how a rabbit's foot is often used as a good luck charm.

Scorbunny's feet give off friction whenever it runs, leaving flames wherever it sprints. It can also ignite its feet to produce a powerful kick and scorch opponents. Its second heart is actually an internal flame sac that produces intense heat energy. Scorbunny can increase its body temperature by moving around quickly, then releasing all of its energy in the form of heat.

Scorbunny as teased as one of the main characters in Pokémon Journeys: The Series (series), as Goh's partner. It debuted in "Settling the Scorbunny!". Before meeting Goh and Ash, Scorbunny started out as a common thief who stole people’s foods to feed its fellow thieves, the three packs of Nickit. Scorbunny then officially joined Goh in "Mind-Boggling Dynamax!," where it became his first Pokémon. It since evolved into Raboot and Cinderace.

Scorbunny is possibly based on a white rabbit. The way its feet catch fire to things may reference how, if something is fast enough, it can catch fire. It also shares similarities with soccer players, fitting its soccer motif other than its signature flaming kicks, bandaid-like on the top of its nose, which is the Galar region’s real-life country bases and its main sport, as well as the band-aid being a symbol of Japanese-designed young, energetic and rambunctious young male characters.

Due to visibly having a soccer motif, this motif foreshadows its evolved forms being attributed with it as well.

Scorbunny comes from scorch (to burn) and bunny. It may also derive from score (as a reference to soccer).

Its Japanese name, Hibanī, comes from hibana (spark) and bunny. 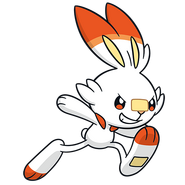 Scorbunny in Sword and Shield trailer 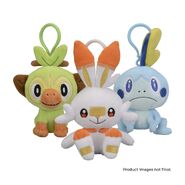 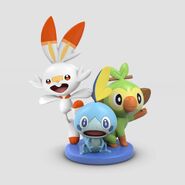 In a event Calendar