Prior to A Meeting of Two Journeys!
Prior to A Riveting Rivalry!

Bagon was used in a Double Battle against Ash. Hawlucha used Karate Chop on Bagon's head, countering its Headbutt attack, but injured his own arm, since Bagon had a hard head. Bagon, after getting hit by Hawlucha, used Fire Fang, but was intercepted by Frogadier's Water Pulse. The match was canceled, as Sawyer, Ash and Clemont heard a sound from a stage, below the battle field. After Sawyer came to the stage to battle Valerie, he sent Bagon to battle her Spritzee. Bagon used Dragon Breath, but Spritzee was not hurt, as it was immune to Dragon-type moves. Bagon went to Headbutt Sprizee, but it avoided it and used Dazzling Gleam to defeat Bagon.[1]

Sawyer later battled against Ash again, where it was revealed that Bagon has evolved into Shelgon. Shelgon faced against Ash's Hawlucha in a battle where Hawlucha used Flying Press, defeating Shelgon in the process.[3]

Sawyer then battled against Ash again in the semi-finals of the Lumiose Conference, where it was revealed that Shelgon has evolved into Salamence. Salamence went up against Ash's Noivern in the battle and got hit by his Boomburst. Salamence used Dragon Rush and hit Noivern, who tried to counter the attack with Dragon Claw. Salamence fired Incinerate and lured Noivern in to hit him with a super-effective Dragon Tail. Salamence repeated its Incinerate attack, which was negated by Noivern's Boomburst. Noivern tried to use Acrobatics in the smoke, but failed, due to Salamence's Protect. Noivern repeated his Acrobatics attack and Salamence used Dragon Rush. After the collision, both Pokémon were defeated, which resulted in a double knockout.[4]

Ash remembered his battle in the Kalos league against Sawyer and his Clawitzer, Aegislash, Salamence and Sceptile when he was reflecting back on his journey.[5] 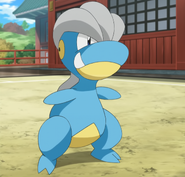