13 chapters as Bulbasaur
17 chapters as Ivysaur
This Venusaur (nicknamed Saur) is one of Red's most powerful Pokémon, and also one of his most iconic and loyal companions.

Saur is, as its Nature would imply, a gentle soul, being one of the kinder members of Red's team. He is also one of the bravest team members, capable of facing off against Blue's Charizard in the Pokémon League. He is also deeply loyal to Red, much like Red's other Pokémon. While not nearly as gung-ho as Poli, Saur's determination isn't strong enough to make him arrogant, and is much more level-headed than both Pika and Poli, making him almost like the de facto leader of the three. He is quite concerned about Red's welfare when he is in some sort of danger.

Bulbasaur was frightened and went into the Viridian Gym, but Red showed that he did not want any harm to him. Red and Oak were attacked by a Machoke, so Bulbasaur fought against it, defeating it with a Solar Beam. Saur was then given to Red as a reward by Professor Oak. Saur traveled with Red through Kanto, fighting many Gym Leaders.

He also appears in Pokémon Silver and Gold and HeartGold and SoulSilver, though it was under its default "Venusaur" name. 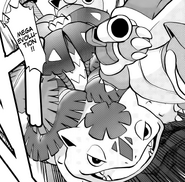 As Mega Venusaur
Add a photo to this gallery

Retrieved from "https://pokemon.fandom.com/wiki/Saur?oldid=1354689"
Community content is available under CC-BY-SA unless otherwise noted.