For the variant appearing in the games, see Saturn.

A Secret Sphere of Influence!

Saturn is character appearing in Pokémon the Series: Diamond and Pearl, who was a commander of Team Galactic.

Saturn hired Team Rocket to steal the Adamant Orb. However, the trio failed, to which Saturn was quite displeased as he flew off in the helicopter away from Eterna City.[1] Saturn later went with his men to Solaceon Town's ruins. They joined to retrieve an artifact from the ruins. Just as they found the artifact, Saturn knew well that Team Rocket was present near him, and came to spy on him. He retrieved the artifact (a cube), and used Bronzor to use Confuse Ray on a group of Unown to thwart them. Saturn was pleased with finding this item, knowing it wouldn't be too long before Team Galactic would reach the Spear Pillar.[2]

Saturn traveled to the site of the Veilstone City meteorites. He ordered his men to obtain the meteorites to unlock an item. He also ordered to destroy the field, to ensure nothing would be left behind. He opened a container, obtaining the cube from Eterna City, which responded to the meteorites, causing them to glow. As he activated the cube, it transformed, then closed it. His men disabed machines, sending a pulse that disabled communications and medical equipment. Saturn's men placed machines on the meteorites, but then Saturn saw Team Rocket spying on them. Saturn's Toxicroak was sent out to deal with them, but the heroes arrived to stop Team Galactic. Toxicroak started to attack them, but Maylene came with Lucario to defeat the enemy as well.

Saturn exlaimed these meteorites would be used to reshape the world. However, he refused to explain their plan in details, and attacked the heroes. Brock's Croagunk noticed Toxicroak, and attacked it, causing an intense battle between the two. However, Pikachu and Electabuzz managed to disable the machines, causing the meteorites to drop, thus foiling Team Galactic's plans. As Team Galactic retreated, a grunt apologized to Saturn for failing to obtain the meteorites. Saturn didn't mind much, to which Saturn added that they were trying to obtain the Red Chain, and ordered the group to go to Lake Valor.[3] Saturn and Toxicroak arriving in Veilstone City to execute their plan was remembered by Ash, Dawn and Brock, as they were going to Snowpoint City.[4]

After that, Saturn was joined by Mars for stealing the Lustrous Orb from Professor Carolina's laboratory. He informed his men about the children that interfered with his plans at Veilstone City. When Cyrus entered the building, he gave the signal to Mars to start their plans. As the ruins were blasted, everyone was distracted by the explosion, allowing Saturn to bypass the security system and descend down from the roof to steal the Lustrous Orb. As his Toxicroak hurt Brock's Croagunk badly, Saturn reminded he didn't want things to get violent if the Lustrous Orb was surrendered to them.[5] Saturn launched attacks on Cynthia, who defended herself. With Cyrus' nod, Saturn released Team Rocket, who ran off, to which Saturn sent Golbat to chase after them. After the Lustrous Orb was stolen, Saturn returned to Galactic Headquarters, but was repriminded by his leader, Cyrus, for his incompetence during the mission.[6]

Saturn reported the status of Mars' mission. When Mars failed in her mission, due to being interfered by the heroes, Cyrus had Saturn pass the order to destroy the entire island. Cyrus later regarded the failure of the mission as nothing more than a simple setback, as he gave new orders to Saturn, to excavate the Spear Pillar.[7] Saturn, on Cyrus' orders, went with Charon to Mt. Coronet to find the Spear Pillar. He was annoyed to their lack of progress, finding more ruins than their desired object, to which Charon reminded that people of Sinnoh believed in the Space-Time legend. As the heroes stumbled upon Team Galactic, Saturn had them surrounded.

He found a suspicious Team Galactic recruit and questioned him, but the grunt replied that he was simply sent from the HQ to help them, but did not know the mission. Charon reminded they were searching for the gateway to the Spear Pillar, which could be unlocked using the key that Team Galactic had obtained already. However, Charon didn't care much about their mission, and had the grunt continue working, who undisguised himself as Looker, from interpol. As Charon had the grunts battle, Saturn heard that they found something: his Toxicroak used Rock Smash to shatter a wall, revealing the gateway to the Spear Pillar. As the key to open it was recovered, it did not react to the ruins: Charon noted that this was not the gateway, after all. Saturn had his grunts retreat, while Charon noted that the gateway lied within Mt. Coronet, but it only needed to be uncovered.[8]

Saturn continued his work on finding the ruins at Mt. Coronet. Finding another ruins, Saturn had used the key, confirming it was the gateway to the Spear Pillar. Saturn then quickly contacted Cyrus, reporting that they had, indeed, discovered the gateway, to which Cyrus had him protect the area until he and other arrived.[9] As Hunter J dropped the bomb to capture Azelf, Gary went to stop her, but was countered by Saturn and Toxicroak. The latter countered Umbreon and Electivire's moves, as Saturn explained the situation to Gary. After J captured the Lake Trio, Saturn, Mars and Jupiter thanked her for the assistance as she departed away, and the commanders went to the headquarters. Due to the Lake Trio's influence, they warped Ash, Brock and Dawn to the headquarters, where they faced Cyrus and his commanders.[10]

After Cyrus left to deal with other matters, it did not take long for Jupiter, Mars, and Saturn to overpower and capture Ash, Dawn, and Brock. Going to Mt. Coronet with the hostages, Cyrus took Saturn, Charon, and Mars with him into Spear Pillar, leaving Jupiter behind to guard the hostages. As Cyrus prepared to summon Dialga and Palkia, using the Red Chain, the Adamant and Lustrous Orbs, as well as the Lake Trio, the heroes and Cynthia arrived to stop them. Saturn had Toxicroak stop them, but was defeated by Brock's Croagunk's Brick Break.

As Cyrus opened a portal to the new world, Mars and Saturn wanted to enter. Cyrus didn't permit them, thinking they would taint his new perfect world. He entered, but Dialga and Palkia closed the portal, trapping Cyrus within it. Mars tried to reach for Cyrus but was stopped by Saturn, shaking his head. Moments later, Saturn was arrested by Looker with Jupiter and Mars, and taken away to face punishment for all of Team Galactic's crimes.[11] Jessie wrote a letter to Team Rocket HQ that she, James and Meowth were the ones that defeated Saturn and disbanded Team Galactic organization.[12] 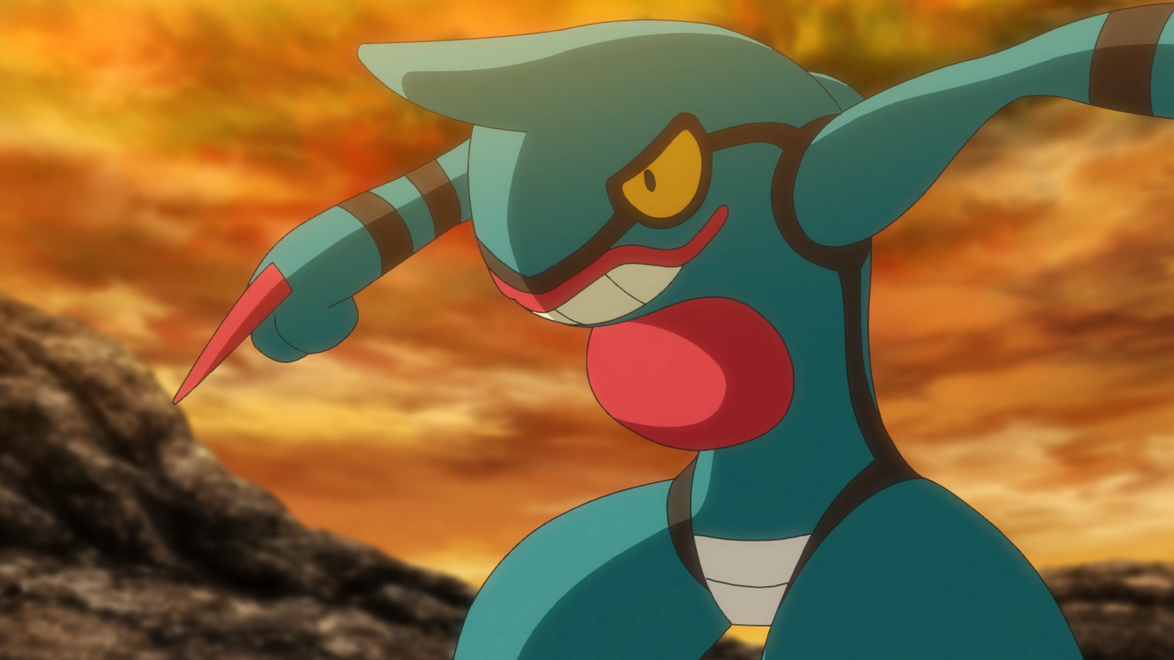 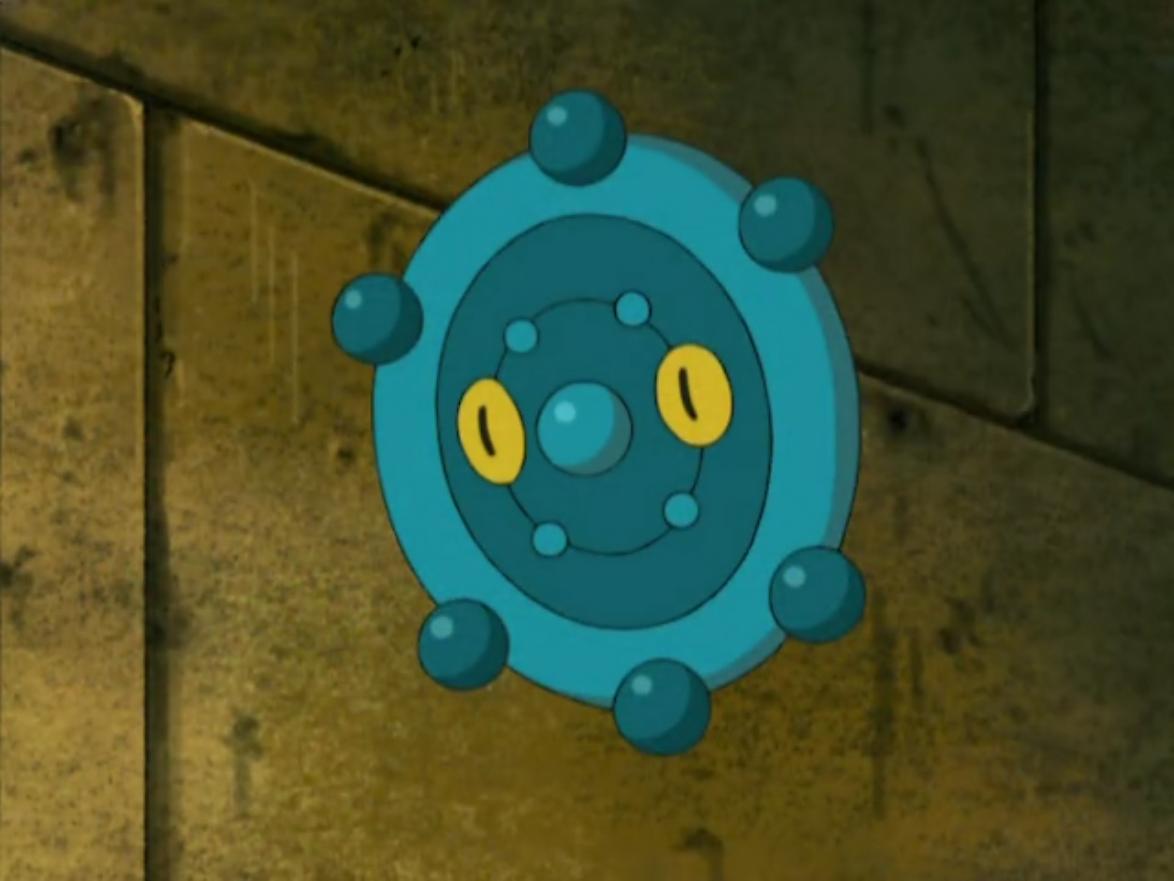 Retrieved from "https://pokemon.fandom.com/wiki/Saturn_(anime)?oldid=1390038"
Community content is available under CC-BY-SA unless otherwise noted.