For the other variants of Toxicroak belonging to Saturn, see Saturn's Toxicroak.

Prior to The Final Dimensional Duel VI

This Toxicroak is a poison/fighting-type Pokémon owned by Saturn.

Croagunk was sitting next to its trainer, Saturn, who was planning to capture Paka and Uji.[1]

Croagunk and Abra to fight them off and interrogate them. To defend themselves, Paka and Uji sent Buizel and Burmy. Croagunk used Poison Jab on Burmy, causing it to drop its cloak. As Saturn laughed, Burmy collected the leaves from the floor to regain its defenses. Burmy used Hidden Power to retaliate, so Uji's Buizel used Dig. However, Croagunk sensed Buizel, due to its Anticipation ability.[2] Saturn laughed, as Croagunk sensed Buizel and used Sucker Punch to deal huge damage to it. Paka and Uji went to the next floor to defend themselves, but Abra Teleported itself and used Fire and Ice Punch on Burmy. Saturn laughed, claiming they should surrender, but noticed Platinum in the shadows, and suspected the grunts told her to hide in the tower. However, Paka laughed, as Uji's Buizel used its tail to blow the wind. The wind caused the leaves to block the machine, preventing Saturn to see anything, and his Abra and Croagunk were easily defeated.[3]

Croagunk was with Saturn in Team Galactic's base, who fired the ancient weapon at Paka and Uji.[4][5] Saturn went back to Veilstone City with his Croagunk, and met up with the other two commanders, Saturn and Jupiter, as they went to report to Cyrus the success of their mission.[6]

At the Spear Pillar, Saturn faced Fantina and Roark. He sent Abra, Croagunk and Octillery against the duo's Pokémon.[7]

At the Distortion World, Charon was being chased by a bunch of trainers seeking revenge, so he had Saturn and Toxicroak face Mira and Alakazam.[8] Alakazam used Power Trick to swap its Attack and Defense stats, followed with Guard Split to heighten its Defense more. Saturn believed it was all pointless, as Toxicroak used Poison Jab to attack Alakazam, but Mira claimed she was just stalling him.[9] Their battle got interrupted by Giratina, who passed by them.[10] 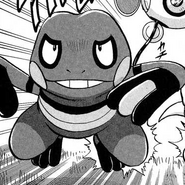 As Croagunk
Add a photo to this gallery

Retrieved from "https://pokemon.fandom.com/wiki/Saturn%27s_Toxicroak_(Adventures)?oldid=1167551"
Community content is available under CC-BY-SA unless otherwise noted.