Saturn is one of the four commanders of Team Galactic.

Saturn is a young man with blue hair styled like a sideways crescent moon and bangs. He has angular blue eyes, and wears a stylized Team Galactic uniform.

The player meets Saturn in Azelf's Cave. Later in the game, the player meets Saturn again when he frees Uxie, Azelf, and Mesprit. After you beat the story mode you can see him whenever you want at their base in Veilstone City. He is now the boss of Team Galactic once Charon is in jail at Stark Mountain. He is on the first floor of the HQ. He talks about Cyrus, his old boss, and how he plans to do things differently than him.

Saturn also stopped Mars from jumping into the time and space portal.

Saturn in Pokémon the Series (anime) 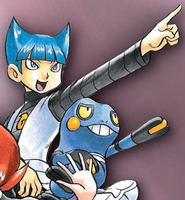