Sandile largely resembles a crocodile. It has what appears to be a black stripe near its eyes in the appearance of a mask, and is mainly a light brownish tan with black striped through its body. On its belly it can be noted that a pink replaces the tan shade, though the stripes continue regularly and later on it'll be used for its evolved form known as Krokorok. It has four legs, a short tail, and three claws to each foot. Its eyes don't seem to have any sort of coloring besides black, and it has large nostrils. No teeth show when its mouth is closed.

Sandile dwell in arid and sandy deserts. They spend most of their time submerged in the sand, leaving only their nostrils and eyes above the surface. They use their powerful legs and lower bodies to "swim" within the dunes. Because Sandile are cold-blooded, they rely on the outside environment to regulate their body temperatures.

During the sweltering heat of the daytime, staying buried in the sand keeps them cool. At night, however, when temperatures drop drastically, these Pokémon rely on the heat retained in the sand from the daytime to stay warm. Sandile also have dark membranes over their eyes; not only do they protect them from blowing sand, but they also shield their eyes from the intense light of the desert sun, absorbing its ultraviolet rays. Though Sandile are predators, desert scarcity and their small stature often leaves them with little choice but scavenging. They are ubiquitous in this role and are sometimes known as the "cleaners of the desert."

Sandile are known to be inquisitive towards human travelers, often walking beneath them or tearing holes in their bags to examine their contents. However, they rarely mean any harm, and may even befriend trekkers if they enjoy their presence. Though normally solitary, Sandile seem to instinctively protect others of their kind if they see any of them being threatened. In warm weather, they may occasionally venture out of their desert homes, though this is a rare occurrence.

Sandile first appeared in A Sandile Gusher of Change, where a group of Sandile were causing trouble at a hot spring resort. However, it later transpired that the Sandile were trying to warn of impending danger and, with the help of Ash and his friends, were able to save the Pokémon in the area. The leader of the gang sports sunglasses, much like Ash's Squirtle, and has since featured in several episodes.

Sandile is based on a baby crocodile. Perhaps more specifically, a Nile crocodile or a literal interpretation of the mugger crocodile, an actual species of crocodile. The black part around its eyes and stripes give it the appearance of a robber.

Sandile comes from sand (as it lives in sand-filled environments, usually deserts) and crocodile.

Its Japanese name, Meguroko, may be a combination of 目 me (eye), 黑 guro (black), and 子 ko (child), due to it being black-eyed. 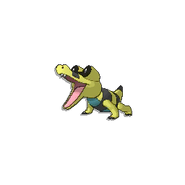 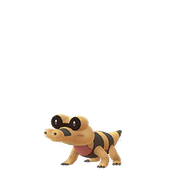