マサゴタウン
Masago Taun
Sandgem Town
Sandgem Town is a town found in Pokémon Diamond and Pearl and is located in the Sinnoh region. It is the second town you come to in the game, the first being Twinleaf Town. Sandgem Town has two houses, one of them being the character's other rival's house. It has the Pokémon Lab (which is run by Professor Rowan), a Pokémon Center and a Poké Mart. This town will be very useful after you beat the Elite Four and get the National Dex. Once you get the National Dex, you can go to the house directly below the Pokémon Center. This is Dawn/Lucas's house. Talk to their little sister, and she will tell you where a Pokémon Swarm is.

Once you reach Sandgem Town, Prof. Rowan's assistant will greet you and take you inside the lab. Just as you are going to enter the lab, your friend comes out and bumps you. Your friend will say that Prof. Rowan isn't as scary as he thought before he speeds off. You head inside and talk to Prof. Rowan. Prof. Rowan will ask you to complete the encyclopedia Pokédex. (If you refuse, he will reply "..." several times until you agree.) Prof. Rowan's kid will be holding a Pokémon that you and your friend did not choose. If you and your rival choose Turtwig and Chimchar, he/she will choose Piplup.

Head outside the lab and Prof. Rowan's kid will show you around the town. He/She will show you the Pokémon Center and the Pokémon Mart. Then he/she tells you to inform your Mom that you are going out for an adventure in order to complete the Pokédex before he/she runs away to Route 202. Because the kid don't allow you to pass Route 202, you head back to Twinleaf Town to inform your Mom about your adventure. 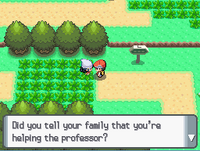 If there is a Pokémon Swarm, the Prof. Rowan's kid's sister knows it. Head to Dawn/Lucas's house and ask her. She will tell you the Pokémon and the locations. You need to defeat the Elite Four first. 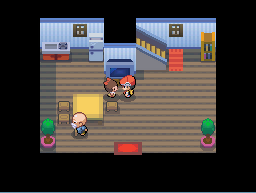 The town first appeared in Following A Maiden's Voyage! and it is Professor Rowan's hometown. Dawn went to Sandgem town to pick her first Pokémon.