Sandaconda is a curled up Pokémon with a color scheme and pattern akin to a diamondback rattlesnake. It has green eyes, two nostrils that resemble gun barrels with iron sights, and a sand pouch on top of its head; said sand pouch is sensitive and easily harmed by strong objects like a Durant’s pincers. The Pokémon usually lies on its coiled body’s underside, and by contracting, the Pokémon can shoot 220 pounds of sand from its nostrils.

In its Gigantamax form, the Pokémon stands on its tail, the patterns on its head coils are replaced by sandstorm-like patterns, and two big sand clouds swirl around it. Its eyes also turn red and three Dynamax clouds surround it. Additionally, the form's sand pouches are so big that over 1 million tons of sand can be stored in it, and the sand clouds on its head spin at such high speeds to the extent that they can demolish a skyscraper.

Sandaconda is predatory, as it likes to eat Durant eggs (similarly to Ekans, who likes to eat Pidgey eggs). However, it gets sad and timid if it has an insufficient amount of sand stored up.

Sandaconda evolves from Silicobra when it reaches level 36.

Sandaconda's design is based on an anaconda and different kinds of desert dwelling snakes such as sidewinders or rattlesnakes. Its nose also resembles a double-barreled shotgun, as it shoots sand from it at high speeds, similarly to how shotguns typically fire multiple small projectiles in a widespread. It could also be based on a ball python, which is known for curling up into a ball to defend themselves or a cobra, which are known to spread out their hood (in Sandaconda's case, it's sand pouch) to intimidate predators.

Its Gigantamax Form is based on a tornado, dust devil, or sandstorm. 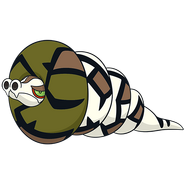 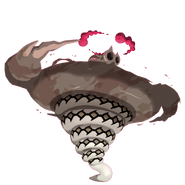