Challenge of the Samurai

Samurai is a character that appears in Pokémon the Series: The Beginning.

He met and challenges Ash to a Pokémon match in the Viridian Forest, using his Pinsir and Metapod. His Pinsir is defeated by Ash's Metapod but their match is, after a long stand off between the two Metapod, abandoned when a swarm of Beedrill attack and steal Ash's Metapod. Samurai initially views Ash as an novice trainer, especially in comparison to the other trainers from Pallet Town (including Gary Oak). His opinion changes when he sees Ash competently handle his Butterfree to defeat a swarm of attacking Beedrill, stating that he is the novice of the two.

Samurai appeared in the opening themes of the Adventures on the Orange Islands subtitle in both the original and dub, but he did not appear in any of the episodes.

Samurai in The Electric Tale of Pikachu (manga) 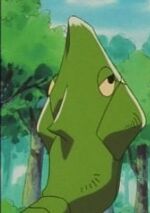 Samurai without his armor.

The samurai, in the opening scene of Adventures on the Orange Islands
Community content is available under CC-BY-SA unless otherwise noted.
Advertisement