Getting to Know You!

Getting to Know You!

14 episodes as an egg
This Vulpix is a Fire-type Pokémon owned by Samson Oak whom Samson Oak had been raising ever since it was an Egg. Vulpix is the Kantonian counterpart to Lillie's Alolan Vulpix, whom Lillie nicknamed Snowy.

Ash obtained the egg from Professor Oak, who asked of him and his mother to deliver the egg to Samson Oak in Alola.[1]

After arriving to the Pokémon school in the Alola region, Ash gave the egg to Samson Oak, who contacted Professor Oak, his cousin.[1]

Shortly after Snowy hatched Samson's egg began to hatch, too, into a red Vulpix.[3]

Vulpix took an instant liking to the other Pokémon as they welcomed it to the world with Samson Oak as its trainer. Ash greeted Samson's Vulpix and Lillie's Alola Vulpix, the latter freezing Ash and Rotom with Powder Snow and the former burning them with Ember. Samson's Vulpix also tried to befriend Snowy, who ignored it. This changed the next day, with Snowy welcoming Samson's Vulpix.[3] One day, a cameraman filmed Samson and Vulpix, as the latter had won the Pokémon Pancake race. The next day, Samson told this to Rotom, giving him more clues to where to find the Electrium Z. Samson also had the thought of entering the next year's race with his Vulpix.[4] When Delia, Ash's mom, came to school, she encountered Samson's Vulpix, and stroked it. Ash, during the presentation, compared that Vulpix with Lillie's Snowy, its Alolan counterpart.[5]

Vulpix accompanied Samson Oak during Professor Kukui and Burnet's wedding.[6] Kukui also compared Samson's Vulpix to Lillie's Snowy, explaining that the climate could have an effect over Pokémon, and believed the same could be applied to humans.[7] Vulpix was with Samson Oak, who was feeling unmotivated on a cloudy day.[8][9] 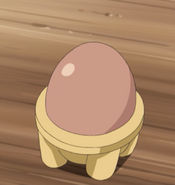 As an egg
Add a photo to this gallery

Retrieved from "https://pokemon.fandom.com/wiki/Samson_Oak%27s_Vulpix?oldid=1406767"
Community content is available under CC-BY-SA unless otherwise noted.