Anabel is a small and slender young girl. She has shiny lilac-colored hair, purple eyes with small eyelashes, and thin eyebrows.

Anabel wears a fancy and slightly tomboyish outfit that makes her slightly resemble a prince. It consists of a long sleeved lilac shirt with a large white collar and gold edges, thin gold cuffs and a white front with gold buttons and edging, and skinny fit pants that are violet at the top and darker purple at the bottom, with a jagged pattern around the knee area separating the two colors. On her feet, she wears white socks and black Mary Jane shoes.

Anabel appears to be much older and more professional fashion-wise (though she still adopts a tomboyish style of dress). Unlike before, her hair is longer and is now tied into a ponytail with a black ribbon. Anabel's new outfit consists of tight black skinny fit pants, matching black shoes, black gloves with gray bumps on them, and a black tie with a white shirt underneath. Since she has since become a member of the International Police, she also keeps a communication device in her ear.

Anabel faces the player character in Battle Tower challenge, once they have won 34 battles.

It is revealed that Anabel had appeared 10 years ago with amnesia, only remembering that she had been from Hoenn, and was in charge of the Battle Tower; she is a "Faller", meaning she is someone who went through an Ultra Wormhole. She is the same Anabel from Emerald, but not Pokémon Omega Ruby and Alpha Sapphire, thus an alternate universe. After becoming part of the International Police, she worked under Looker for a period of time, quickly rose up the ranks, and then got promoted as Looker's boss thanks to her diligence and hard-working attitude.

Anabel make a cameo with Looker in Poni Plains. However, instead of being assigned for an Ultra Beast mission, they are on vacation. 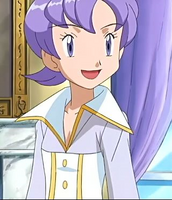 Anabel's VS sprite in Sun & Moon

Retrieved from "https://pokemon.fandom.com/wiki/Salon_Maiden_Anabel?oldid=1423709"
Community content is available under CC-BY-SA unless otherwise noted.