Salazzle is a slender bipedal reptilian Pokémon resembling a lizard. She is colored black and purple, except for a pair of pink markings on her chest. Her hands and feet have five fingers and toes each, and a pair of long ribbon-like appendages emerge from its back.

Salazzle emits toxic fumes that contain pheromones that attract any males in the area and cause them to be easily controlled by Salazzle. Salazzle lives with a reverse harem of male Salandit. If one of her Salandit fail to bring it food, she will slap it with its palm.

Salazzle produces toxic pheromones that can control any male human or Pokémon.

Salazzle is the female exclusive evolution of Salandit, starting at level 33.

Salazzle may be based on a salamander, which is usually associated with fire in mythology. Its all-female nature may be inspired by the New Mexico Whiptail lizard. Its appearance and posture may also draw inspiration from Dromaeosaur dinosaurs such as the Velociraptor. It may also be inspired by the mo'o, a dragon-like creature in Hawaiian mythology (as Alola, the region Salazzle originates from, is based on Hawaii). Mo'o were stated to be large female lizards with dark scales and would appear when fire was near (referencing its Fire-type). They also had the ability to shapeshift into women in order to seduce and then consume men, possibly being the inspiration for its more feminine build and female-only evolution method.

Salazzle comes from salamander and dazzle or sizzle.

Its Japanese name, Ennyūto, is a portmanteau of 炎 (en, flame) and newt, newts being amphibians related to salamanders. 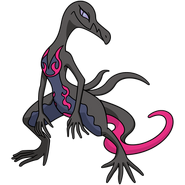 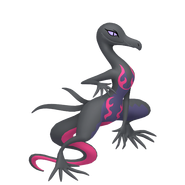 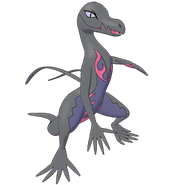 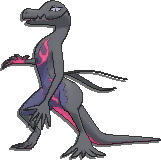 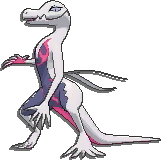 Add a photo to this gallery
← Salandit | Salazzle | Stufful →
Retrieved from "https://pokemon.fandom.com/wiki/Salazzle?oldid=1385482"
Community content is available under CC-BY-SA unless otherwise noted.