Salandit is a salamander-like Pokémon with black-colored skin and reddish-orange markings on its back. It has squinting purple eyes, a mouth filled with black, jagged teeth, and a pair of ear-like appendages on the back of its neck.

Although they aren't very strong Pokémon, Salandit are terribly cunning and can confuse opponents during battles. They often make their homes near the sites of active volcanoes. Salandit in fact prefer to sneak up on prey from behind and immobilize them with their fumes before the victims even notice. Humorously, Salandit have great trouble hunting Spinda, as their dizzying gases have little effect on these tipsy Pokémon. When endangered, female Salandit may call upon the males of the area to come to its aid, amplifying the amount of poisonous gases released. Male Salandit will deliver most of their gathered food to females, often leaving them quite malnourished.

They are able to secrete a cocktail of flames and noxious gas from the tip of their tails. Female Salandit are able to produce special pheromones that attract mates and humans, which can control the victims who have sniffed them.

Salandit is based on a salamander, specifically a fire-bellied newt, which has bright orange markings to warn predators of its poisonous secretions. The fact only females evolve may be a reference to the all-female whiptail lizard. The black marking on its face and the ear-like appendages resemble a mask worn by burglars or possibly ninjas.

Salandit is a combination of the words salamander and bandit. 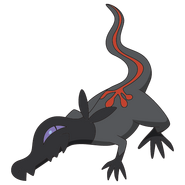 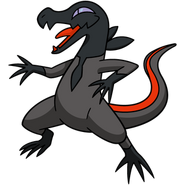 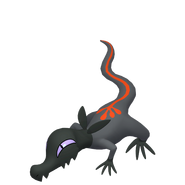