a wife and son

Sailor Eldritch (ナミキ Namiki) is an NPC found in southwestern most part of Canalave City. He operates the boat that takes the player to locations such as Fullmoon Island and Iron Island in the Sinnoh region.

Not much is known about Sailor Eldritch's past, but it is known that he works at the docks in Canalave City and lives with his wife and son in town. As well he operates the boat that can take players to Iron Island and Fullmoon Island. Helping his son is a requirement for the Darkrai event in Pokémon Diamond, Pearl, and Platinum.

In the games, sometime after the player has obtained the National Dex, Eldritch's son falls into a nightmare state causing him to thrash about in his sleep. He also mutters something that hints that Darkrai is haunting his dreams.

When the player meets Sailor Eldritch at this point, he will request their assistance in healing his son. Eldritch will then take the player to Fullmoon Island where they will encounter Cresselia, who will flee and leave behind a Lunar Wing. The player returns to Sailor Eldritch and gives him the item to heal his boy. This task must be completed in order to get Darkrai.

In the Manga it is revealed that Eldritch meets Diamond and his pokemon while manning a ship for the first time. During this trip Diamond reveals to him that he was given a note from Bryon to make himself home on the ship and it is from this that it's revealed that Eldritch owes it to Bryon for introducing him to his future wife. Soon after, Eldritch's boat nearly crashes into iron Island. Sometime after landing on Iron Island, Eldritch witnesses the hatching of an egg, which reminds him of the day his son was born.

Eldritch's son's storyline from the games is also mentioned in the manga when it is revealed that it was actually Palmer who went to Fullmoon Island to find a cure for Eldritch's son, as opposed to the player in the games version of the story. 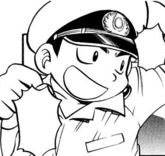 Eldritch leaving home for his boat in the manga 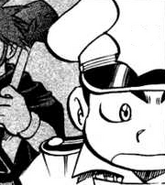 Eldritch reading the note from Bryon
Add a photo to this gallery
Retrieved from "https://pokemon.fandom.com/wiki/Sailor_Eldritch?oldid=1011928"
Community content is available under CC-BY-SA unless otherwise noted.