For the variant appearing in the games, see Sabrina.

Sabrina is a character appearing in The Electric Tale of Pikachu, who is the Gym Leader of Saffron City in the Kanto region.

Unlike the core series, this version of Sabrina is a nice, friendly, kind, caring, gentle, sympathetic, good-hearted, fun loving, bubbly, and happy person who loves others and puts them ahead of herself, is always up for a laugh, and warmly welcomes every pokémon trainer to stay as long as they want in her gym so they can watch how other pokémon trainers battle.

At some point in the past, Sabrina lost her entire team to Haunter and it caused her to bear a grudge towards it. She encountered Ash when he fell on his way to Saffron City Gym and provided him with food. She was challenged by Ash for a gym battle, and defeated him using her Abra. She left to attend a phone call regarding Haunter's appearance, and fell prey to its Dream Eater when she saved a group of trainers from it. She communicated with others using her Abra, told them about Haunter's location, and helped others battle Haunter by amplifying Abra's psychic powers to counter Haunter's Psychic. Later, she woke up from her slumber and saved Ash from being crushed by debris. She found that she bore no hate for Haunter after its death and wept tears, which made Brock console her. 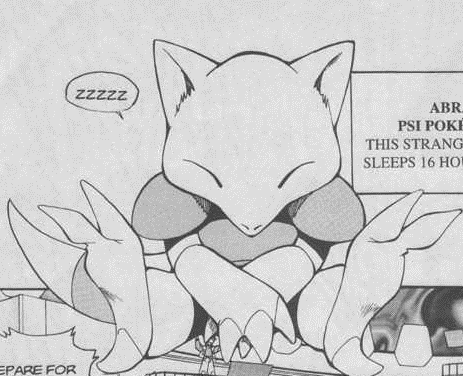 Retrieved from "https://pokemon.fandom.com/wiki/Sabrina_(ETP)?oldid=1131793"
Community content is available under CC-BY-SA unless otherwise noted.