For other variants of Kadabra belonging to Sabrina, see Sabrina's Kadabra.

Less than 1 episode as Abra

This Kadabra is a Psychic-type Pokémon owned by Sabrina.

Abra appeared during Ash's match with Sabrina. It first appeared as if it was sleeping, as Ash sent in Pikachu. Whilst the two Pokémon battled, Abra evolved into Kadabra.[1]

It displayed great strength after its evolution by controlling Pikachu's Thunder with Confusion, turning the attack not only against him but into what appeared to be a dragon made of electricity. It used Psychic to slam Pikachu into the ceiling and on the floor repeatedly until Ash couldn't take it and forfeited the match, causing it to stop the brutal onslaught.[1] After arriving at the tower in Lavender Town, Ash reminded Pikachu and Charmander that they had to be brave and catch the Ghost-type Pokémon, otherwise Kadabra would defeat them again.[2]

It was supposed to battle Ash's Haunter, but it was nowhere to be seen. Later, in Ash's re-rematch Kadabra battled Pikachu again and was tougher than before, especially with attacks like Teleport and Psybeam. Just as Ash thought he had the battle won with a devastating Thunder attack, Sabrina told it to use Recover, which healed Kadabra back. When Sabrina was laughing because of Ash's Haunter's slapstick, Kadabra was laughing as well since they were both psychically linked, making it unable to battle.[3]

Ash, while speaking to Otoshi about Gym Badges, recalled how his Pikachu battled Sabrina's Kadabara.[4]

Kadabra is the first Pokémon to evolve during a Gym battle with Ash. 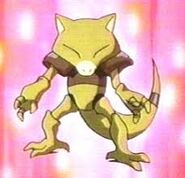 As Abra
Add a photo to this gallery

Retrieved from "https://pokemon.fandom.com/wiki/Sabrina%27s_Kadabra_(anime)?oldid=1161930"
Community content is available under CC-BY-SA unless otherwise noted.