The Master of Psychic Pokémon!

Sabrina (ナツメ, Natsume), also known by her title The Master of Psychic Pokémon, is a character from Pokémon Red and Green. Sabrina is the Saffron City Gym Leader and, hence the title she bears, is an adept user of Psychic-type Pokémon. She gives the Marsh Badge to Trainers that are able to defeat her. She possesses psychic abilities and specializes in Psychic-type Pokémon.

Sabrina is a slim young woman of medium height. She has long black hair with shorter layers around her face and a fringe and small purple eyes. She wears a red and black dress with yellow cuffs over black tights/leggings, white gloves and red and yellow knee-high boots.

In the HeartGold & SoulSilver games, she has shorter hair, it is now around shoulder blade length, and she wears a tight-fitting spaghetti strap pink crop top that shows her midriff and white slim fit pants attached with a black belt around her waist and pink slip on shoes. She also wears green and black bracelets on her wrists.

Sabrina appears in the Let's Go Pikachu and Eevee games with a similar outfit, her dress has black sleeves and a X is added, she also wears green boots.

Possessing a very serious and unwelcoming type of personality, Sabrina, much like the Pokémon she commands, is easily identifiable by the cold, calculating expression on her face. Her strong compatibility with Psychic-type Pokémon and her own, robotic appearance could mistake her for being inhuman.

Known as "The Master of Psychic Pokémon", she has had psychic powers ever since she was a child, when she threw a spoon and accidentally bent it. She apparently dislikes battling, but is hard to beat because she can communicate with her Pokémon telepathically.

The name Sabrina may originate from "psychic" and "brain". It may also be a reference to Sabrina, the Teenage Witch, a television series.

Sabrina in the games is a far less complex character than her Anime personification. She was first seen in the original Red and Blue games, as the Saffron City Gym Leader. When defeated, the player receives the Marsh Badge along with a TM. In Generation I games the player receives TM46 (Psywave) and in the Generation III games, TM04 (Calm Mind). After Sabrina's defeat in HeartGold and SoulSilver, she can be found at Olivine Port on Fridays, ready to give out her PokéGear number. She is at Olivine Port on Mondays and can be called for a rematch on Sundays between 10 a.m. and 8 p.m. In Black 2 and White 2, Sabrina is an actress who appears in the "Magical Kingdom's Mysterious Doors" series of scripts; she also makes an appearance at the PWT. 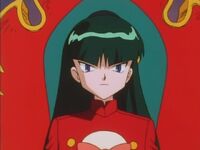 Sabrina in Pokémon the Series (anime) 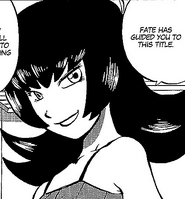 Sabrina in the Masters trailer (anime)

Sabrina's VS sprite in Red & Blue

Sabrina's VS sprite in Yellow

Sabrina's VS sprite in FireRed & LeafGreen 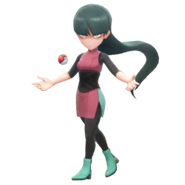