Under The Alolan Sun

The Guardian's Challenge! (守り神カプ・コケコ登場！挑戦、オレたちのZワザ!! Enter the Guardian Deity Tapu Koko! Let Us Attempt To Master Our Z-Move!) is the 2nd episode of Pokémon the Series: Sun & Moon.

Ash and Pikachu have decided to enroll in the Pokémon School. One day, their classmates decide to hold a surprise welcome party for them. But in the middle of this excited party, Tapu Koko, the Pokémon known as the island's guardian deity, shows up.

At the school, Lana has Popplio make a watery balloon, while the boy has Togedemaru start running on a wheel to charge up the computer program the had boy made. Lillie approaches the green-haired girl, Mallow, showing a better recipe for the Pokémon food by mixing Mago and Aguav. Mallow takes up the advice and Bounsweet jumps in happiness, which terrifies Lillie. Mallow finds it a shame Lillie can't touch Pokémon, but Lillie claims she does only if she likes it. Kiawe comes, reporting he had a delivery to Ula'ula Island. The boy is surprised Kiawe went so far, but Kiawe trusts his Charizard that he could carry him that far. Suddenly, Kukui arrives with Ash. Kiawe notices the Z-Ring around Ash's hand and is surprised.

Kukui asks of the students to help Ash, who has enlisted into the school. Ash welcomes such gratitude, exclaiming he wishes to become a Pokémon Master. Ash talks with others, who are interested in the Z-Ring. Kiawe claims that's an Electrium Z and knows Ash couldn't have obtained it from the Island Challenge. Ash explains he got it from Tapu Koko; he and Pikachu followed its voice and it gave him the ring. Lillie recalls, from a book, while Tapu Koko is the guardian, it can also punish people and cause a lot of trouble. She recalls that it can also bring gifts to the people it likes, making Mallow exclaim Tapu Koko likes Ash. The boy recalls Kiawe obtained his ring from the Grand Trial of Akala Island, which Kiawe confirms.

Ash realizes he could use the Z-Move like Kiawe did. Kiawe yells out that Ash cannot simply use a Z-Move, for the trainer and Pokémon's feelings have to be in sync. He states such a feeling has to show respect and can be turned into power. Kiawe states those that are considerate of the world can use Z-Moves, something Ash should have, since has the ring now. Ash states he doesn't fully understand what Kiawe said, but decides to cherish the ring, as well as anything that has to be used for a Z-Move. Kiawe approves of that, while Kukui comments how a clash of Thunderbolt and Flamethrower sounds interesting. He exclaims today's lesson is brought by the principal. Samson exclaims certain Pokémon are different than those found in Alola, like the Exeggutor. Lillie notices a normal Exeggutor is much smaller than an Alolan one. Samson explains the warm weather and mild climate made the Alola's Exeggutor much higher this way, which is perfect for it and Exeggcute. Samson also explains Exeggutor has a different type, which is Grass and Psychic, while Lillie states the Alola one is Grass and Dragon.

Ash is amazed and goes to pat Exeggutor's tail. However, Lillie is terrified and tries to warn Ash. The tail slams Ash, who gets blown away. Lillie explains she wanted to say that the tail has a mind of its own. Ash simply asks why didn't she warn him sooner, while Samson claims this was a good experience for all of them. Later, Ash eats some food and loves it; Kukui explains it is Alola's delicacy, named Alolan Plate. Professor Kukui is glad Ash likes it and notes his Rockruff and Pikachu are getting along. Ash is finished, which surprises Kukui he already ate the whole meal, along with Pikachu and Rockruff. The latter goes to Ash and rubs him, then does the same to Pikachu, showing its friendliness. Suddenly, Kukui is called and goes away for a bit, then gives his approval. Mallow understands and tells others the professor approved of their plan, which makes the group excited for tomorrow.

The next day, Ash runs to school, since he is late. However, Popplio blows out a balloon, which surprises Ash, who falls on the ground. The group comes, stating this was a surprise. Kiawe raises Ash up from the ground, while the boy, Sophocles, challenges Ash, as the second surprise today. Ash is glad they can battle, but realizes it is something else. Mallow explains the team has to pierce the balloons to win. Ash and Pikachu are displeased, but decide to do this challenge. Ash and Pikachu try to pierce the balloons, but are going slowly, while Sophocles pierces the balloons on Togedemaru's spikes. Lana states they can use moves, too, so Pikachu uses Thunderbolt. However, Togedemaru absorbs the attack and uses Zing Zap, which starts piercing the balloons. Ash is startled, while Sophocles explains Togedemaru's Lightning Rod made it absorb Pikachu's Thunderbolt, then executing the move. Meanwhile, Tapu Koko is watching.

For the next surprise, Pikachu and Popplio have a race. Pikachu goes in the water and starts swimming, though Popplio outmaneuvers him and dives out, reaching the end. Lillie explains Popplio can swim up to 40 kilometers per hour. Pikachu is disappointed, but Ash comforts him and wipes him with a towel. For the next challenge, Kiawe steps forward. Soon, Ash and Kiawe ride Tauros in a race. Samson and Kukui watch this, being intrigued by the surprise party the students made for Ash. Samson wonders if Kukui will participate. Kukui confirms he will do that, as he is the fifth surprise. Kiawe speeds up and wins the race, though he praises Ash for having a close-call. Ash thanks Tauros and Pikachu for supporting him. Kukui arrives, stating he is the fifth challenge, as Ash has to battle him. Ash is psyched, but before they can battle, Mallow states they need to eat lunch she made. Ash realizes he is starving, and so are the others.

As they are eating, Mallow is glad she used Lillie's recipe. Ash and Kiawe eat the food, complimenting how tasty it is. Suddenly, Ash hears a familiar sound. Tapu Koko comes to Ash, startling him and others. Still, Ash expresses his gratitude for obtaining the Z-Ring from Tapu Koko, who snatches Ash's hat and flies off. Ash chases after Tapu Koko and others follow him, though Kukui has to pull Sophocles, who tries to climb past a fallen log. In the forest, Ash stops for a bit and places the hat on Ash's head, then makes a battle pose. Ash realizes Tapu Koko wants to battle him, so Lillie recalls Tapu Koko sometimes even challenges people to battles and Alolan wrestling. Ash understands and accepts the challenge, so Tapu Koko starts with Electric Terrain. Tapu Koko hits Pikachu and repeats its attack, which Pikachu dodges. Pikachu uses Thunderbolt on Tapu Koko, but after the attack, Tapu Koko is unharmed. The latter flies to Ash and touches the Z-Ring, as it wants him to use the Z-Move.

Ash triggers the Z-Ring and envelops himself with an aura, which is transferred onto Pikachu. Pikachu launches a Z-Move: Gigavolt Havoc onto Tapu Koko, making a great blast. After the explosion, Ash sees that the Electrium Z disappears, while Tapu Koko protected itself from the attack. After the latter flies off, Mallow is worried about Ash, seeing how powerful the Z-Move was. Kiawe sees the Electrium Z broke into pieces, stating Ash is not yet ready to use the Z-Move, as he didn't complete the trial. Ash lowers his head, but decides to take on the Island Challenge. Kukui approves of this, as do his friends, though Kiawe feels forced to do this. Ash thanks them for the support. The next day, as Ash has breakfast, Kukui gives him a present, a Pokédex. 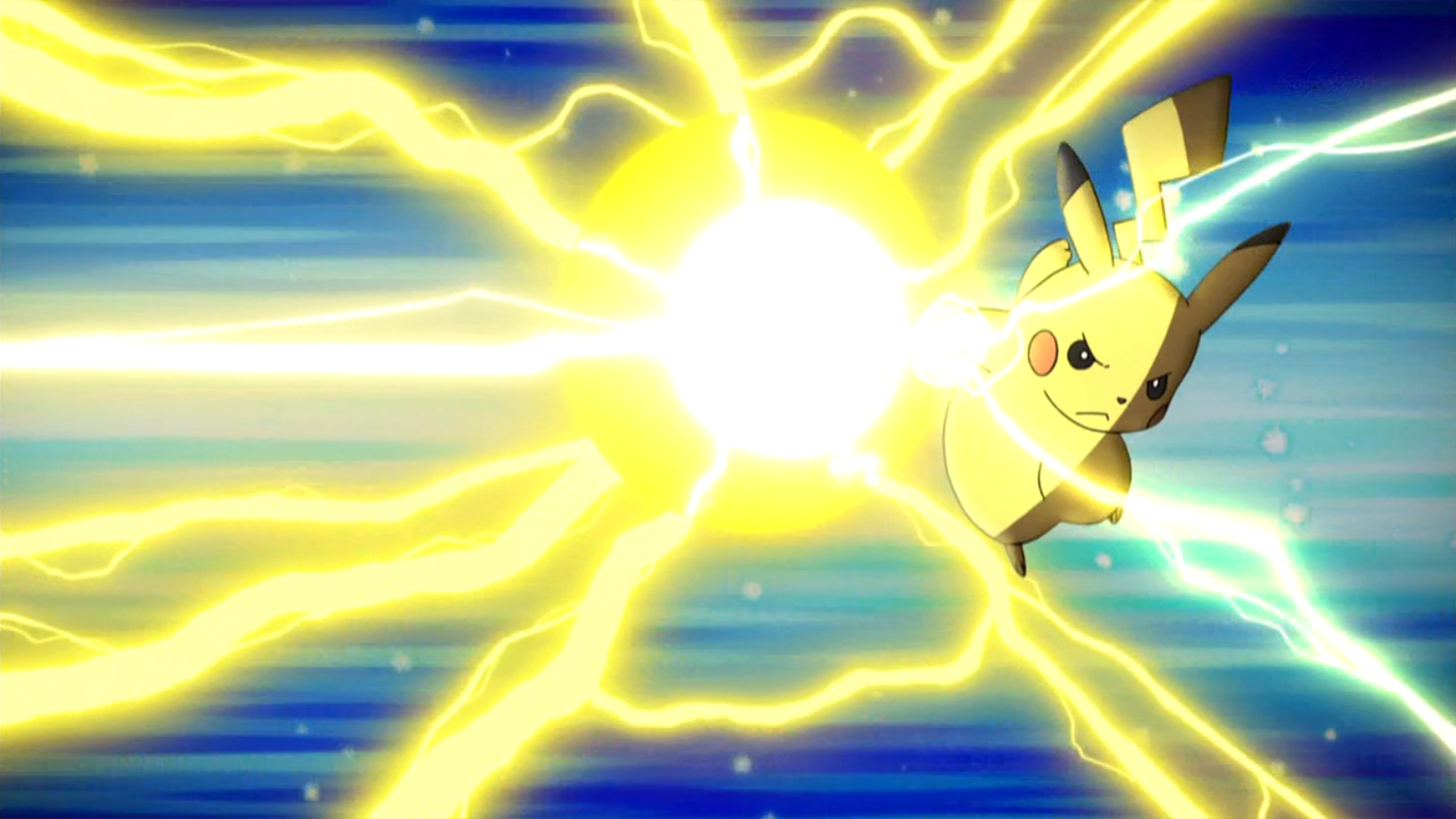 Retrieved from "https://pokemon.fandom.com/wiki/SM002:_The_Guardian%27s_Challenge!?oldid=969233"
Community content is available under CC-BY-SA unless otherwise noted.