Ash and Pikachu have gone on a trip to the Alola region, which is overflowing with abundant nature. After having encountered Pokémon that have their own Alola forms, the excited Ash then hears there is a "Pokémon School" there where he can learn about Pokémon, and wants to enroll.

In the Alola region at Melemele Island, Ash and Pikachu are having fun, by surfing on a Sharpedo, as they are on a vacation. They speed up and dive, finding many Water-type Pokémon. Ash also finds a black one with pink horns and taps it. The Pokémon extends its hand out of its mouth, startling Ash and Pikachu. However, the Pokémon is friendly enough, so Ash shows the peace sign gesture before resurfacing. As he and Pikachu catch some air, they are attacked by a pink Pokémon, whom a blue-haired girl riding a Lapras has fished out. Ash is startled and falls off from Sharpedo, which makes the girl and the blue Pokémon beside her laugh. Ash realizes he was fooled and laughs as well.

Ash returns to the docks, stating he enjoyed the Sharpedo jetski. Ash promises to return and strokes Sharpedo for giving them such a good time. Elsewhere, a black Pokémon passes a strange-looking Exeggutor. The Pokémon lays around the bit and relaxes. However, Pikachu and Ash are racing and the latter stomps on the Pokémon's tail. Ash apologizes, but the Pokémon, covered in sand, launches Ember and hits Ash's face, knocking him on the ground. Ash's mom and Mimey are relaxing under an umbrella when Ash comes, reporting he had a great time riding Sharpedo and finding Pokémon he never saw before. Delia is grateful they have such a great time and is thankful Mimey managed to win all of them a ticket to Alola. After they won the ticket, they went to Professor Oak's lab and flew to the Alola Region via an airplane. Delia states it is time to meet up with Professor Oak's cousin, as Professor Oak asked of them to deliver a Pokémon egg to his cousin once they are at Alola.

Ash and Delia take a Pokémon Taxi, making Ash really excited. The driver states they can go anywhere in Alola by using Ride Pokémon, like the Tauros he uses to pull the taxi. Ash thinks the Sharpedo he was surfing on was a Sea-Ride Pokémon, which the driver confirms. Delia reminds Ash they have to take the egg to the Pokémon School. Before they do, Delia sees some fruits at the market and goes to buy some as a souvenir. While she is browsing, Ash looks for a bit and finds a Pokémon that emerged from the ground. Ash gazes it up close, but gets his nose clenched. The Pokémon digs away, so Ash goes to pursue it. Delia, however, turns around and sees Ash is gone. Ash and Pikachu go through the forest, while a being observes them. Ash chases the Pokémon, which escaped, while a fruit falls on Ash's head, making him realize he and Pikachu have gone too far. The being throws a Sitrus Berry on something, waking it up.

Suddenly, Ash finds a pink Pokémon, who waves at him and Pikachu. Ash waves his hand at the Pokémon, who becomes disturbed and kicks down a tree. Ash and Pikachu realize this is a threat and starts running off, while the Pokémon chases them away. The being passes by, distracting the pink Pokémon, who stops chasing Ash and Pikachu. Taking a break, Ash notices someone flying a Charizard. Ash and Pikachu follow them to a location with lots of people. They see a girl with a large hat, with three Pokémon besides her. Ash and Pikachu go to examine the Pokémon, but the girl warns them to look out. Ash and Pikachu look around and get trampled by three Tauros, whom two girls and a boy ride. Despite this, Ash is fine, since he has some back home. The girl wonders if Ash is alright, but gets startled by one of the Tauros, for she likes them as a subject to study. The girl with the green hair apologizes for not reacting sooner. The boy states that the girl with the large hat, Lillie, does not touch Pokémon. Lillie denies this, stating she does so once she is certain she is safe to touch them.

Ash realizes he saw the blue-haired girl before. The green-haired one asks her if she knows him. Ash introduces himself and his buddy Pikachu and asks what the place is. The green-haired girl states it is the Pokémon School and sensing Ash is actually lost, she shows him around. The girl's Pokémon emits Sweet Scent, making Pikachu relaxed. Inside a room, Ash is amazed at the fossil replica and looks outside, seeing a trainer playing with a Machamp and a Primeape. The girl explains the school offers both the trainer and Pokémon to study together. The girl knocks on the door, stating the principal has a new student. Ash is surprised, though Delia comes out of the room, having arrived to the school. Ash is also surprised to see Professor Oak. However, the man replies he is actually his look-alike cousin, Samson, the principal of the school. Samson states people need to live in peace and happiness and even imitates Trapinch and Tyranitar, leaving Ash and the girl baffled.

Ash explains he followed a Charizard, so the girl apologizes for jumping to conclusions. Samson calls his cousin, Samuel, reporting he received the egg. Professor Oak thanks Delia for watching over the egg. Per Samson's permission, the girl takes Ash's hand, showing him around the school. She shows one of the classrooms, making Ash excited at the view. The girl also explains this isn't the only classroom, as they can learn much. Suddenly, a man greets them both. The girl greets Professor Kukui, explaining he is their teacher. The girl introduces Ash to the professor, who heard about him from Professor Oak. Kukui merely asks of Ash to enjoy the school, even for a day. Suddenly, they notice something in front of the school. Three people, dressed in black clothes, are displeased their motorcycles have been stopped by a child and his Charizard. The child reminds these people, Team Skull, are the ones blocking the road. The men dare the child to repeat that, while Ash and the girl come to Lillie and the rest.

The girl explains Team Skull are some people that try to provoke people into battle. The grunts promise to forget this if the child beats them in the battle, else they would take his Charizard. The child states the grunts will regret this, who send three Zubat, Yungoos and Salandit. The child goes to prepare his attack, but Ash comes, stating how wrong it is to group against someone and promises to help the child, whose name is Kiawe. Despite this, Kiawe refuses Ash's help, who sends Pikachu in. Kukui is impressed, while Kiawe sends Turtonator. Kiawe explains Turtonator is his partner, who is a Fire/Dragon-type Pokémon. The grunts have Salandit use Venoshock, the Yungoos Bite and Zubat to use Leech Life. Pikachu uses Quick Attack, dodging Salandit's attacks and hitting them. Turtonator defends itself and launches an attack at the remaining Pokémon. Kiawe explains Turtonator's shell's spikes explode if it is agitated. Pikachu evades Salandit's Flame Burst and defeats them with Thunderbolt. The grunts are defeated, while the battle is observed by the being.

Kiawe promises to defeat the rest. He touches the device on his arm, which surprises the grunts he is using "that technique". Kiawe's body flames, as he triggers Turtonator's Inferno Overdrive, which defeats all of Team Skull's Pokémon. The grunts call their Pokémon back and retreat. Ash asks Kiawe what was that, while Kukui informs Ash it was a Z-Move. The girl compliments on Ash and Kiawe's battle, while Kukui explains there are guardian deities that protect the Z-Moves. He states those that conquer the Island Challenge can use the Z-Moves. Ash is psyched and Kukui is impressed by his battle style, thinking he likes to battle. Ash confirms this, but a berry falls on his head, as he sees the being. Ash asks if someone saw it, but they deny, so Ash explains it had a yellow-orange head that resembled a rooster. The group realizes it must be Tapu Koko, the guardian deity of Melemele Island.

While having dinner with his mother, Ash think of today's events. Delia sees her son is quite tired, thinking something excited happened today. Ash confirms this and hears a cry. He and Pikachu run off and follow the cry of Tapu Koko. Ash approaches it, wondering why did it follow him. Tapu Koko simply shows a device, which Ash remembers that Kiawe wore. Tapu Koko points to Ash to wear the Z-Ring and Ash accepts the ring and places it around his arm, as it glows brightly. Tapu Koko flies off, while Ash gazes at the new item. The next day, Ash calls his mother, as he is staying at the school. Delia is glad, while Ash thanks her for letting him stay at the school. Delia admits she did feel Ash would go to the school anyway. Suddenly, Ash grabs the bag and runs off, bidding farewell to his mother. Ash takes a break and looks at the Alola sea, then has a race with Pikachu towards the school. 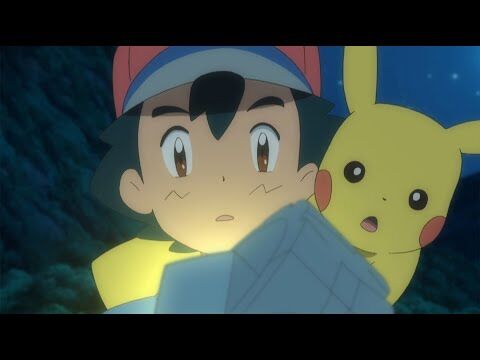 Ash fell in the sea

The girl and her Pokémon are laughing

Ash thanks Sharpedo for the ride

Delia and Mimey are relaxing

Mimey won the ticket to Alola

Professor Oak requested the egg to be delivered to his cousin, Samson

The pink Pokémon crushes a tree

Ash and Pikachu run away from the pink Pokémon

The girl takes Ash to the school

Ash and Mallow are bewildered by Samson's reactions

The guy faces some bullies

The guy activates his Z-Ring

Turtonator is enveloped by Z Energy

Kukui is pleased by the boys' victory

A Tapu Koko passes by

Ash and Pikachu have enlisted in the school