Russet is a character appearing in Pokémon the Series: Black & White.

Russet has a similar appearance with Mr. Sukimo as they both wear the same cloths, have shaved heads, and come from the Pokémon Fan-Club. One thing different of them, is Russet doesn't say Remarkable just like Mr. Sukimo. 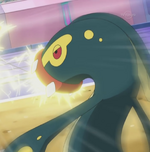