Running Shoes are special shoes that allow the player to run. They are usually received from the player's mother, although they are received from an old man in Cherrygrove City in the HeartGold and SoulSilver versions. To use them, hold down B while moving. In most games (Except in Generation IV, Generation V and Generation VI), the player can't run inside buildings.

Running will cause other Pokémon Trainers to look in your direction, so they cannot be used to quickly slip by unnoticed. As soon as they notice the player, they will engage the player in a battle.

The Running Shoes allow the player to run instead of walk by holding the B button and pressing the D-pad in any direction. There are a few places that cannot be run through, such as very tall, thick grass or deep snow. In Generation IV, instead of being limited to certain buildings as in past games, all buildings allow running, but deep snow is added in which one can sometimes run but never bike. Attempting to dodge Trainers with the Running Shoes will attract the attention of the Trainer and cause them to face towards the player. Running through the tall grass increases the chance of being attacked by a wild Pokémon. 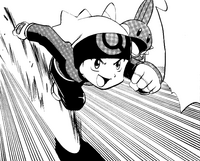 In Pokémon Adventures, Norman gave Ruby a pair of Running Shoes. Like in the game, it allows Ruby to run more faster than the normal one using compacted air to push him.

The speed at which players can run is about twice as that of walking, although slower than any of the bicycles.

The aide in Pewter City giving the Running Shoes to the player.

The old man in Cherrygrove City giving the Running Shoes to the player.
Add a photo to this gallery

Retrieved from "https://pokemon.fandom.com/wiki/Running_Shoes?oldid=1043191"
Community content is available under CC-BY-SA unless otherwise noted.