Runerigus appears to reside in a brown rune stone with a red serpent motif on it. It appears to use the head to shield off most of its face (save for its only visible pink eye, which resembles Cofagrigus'). Parts of the snake body is cut off to hide its forearms only its fingers are left exposed. It has a long ghost tail that connects to the snake's tail.

Anyone who touches Runerigus's cursed body will be inflicted with horrifying memories behind the painting carved within.

It is said that Runerigus was created when an ancient painting became cursed and came to life after absorbing the spirit of a Yamask.

Runerigus evolves from Galarían Yamask after it has taken 49 HP of damage in battle without Fainting, then being taken to the big stone arch in Dusty Bowl while in the player's party.

Runerigus is based on a living rune stone from Britain and Scandinavia. More specifically, it may be based on the Swedish Ingvar runestones, strange runes that commonly carry snake-like symbols on them to commemorate important events in the Vikings history, most of which are used to resemble the death of an important person, hence the Ghost typing. Its pattern might be analogous to the mythical creature Lindworm, a snake-like dragon that hid inside of rocks and mountains (which may have also been the inspiration for Applin) or Apep, the Egyptian god of chaos, often represented with a snake-like form.

Its evolution could be a reference to Bardo Thodol, a Buddhist form of purgatory that occurs before reincarnation which is said to last 49 days, this number being represented by the amount of damage Galarian Yamask must take before passing under the bridge in Dusty Bowl. The process of going under the bridge may also symbolize dying in one form and being reincarnated in a different form once passed through. 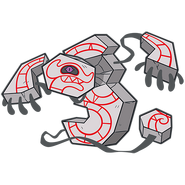 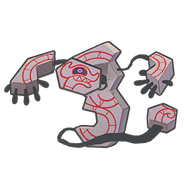 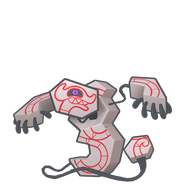