Rufflet is a small shaggy bird-like Pokémon that resembles an eagle chick. This species of Pokémon can only be male. He has quite a big head compared to the size of his body. The head has shaggy cream-colored outer feathers. The inner part of his head is blue, with a red spike at the top. He has ovular black eyes, with white pupils. His neck feathers are cream-colored and downy, encircling his neck like a scarf, and his wings and small body are grayish blue, as well as the mask around his eyes. He has fairly large feet and talons with black claws. His feathery tail is short and cream-colored. They crush berries with their talons.

Rufflet possesses sharp talons that are able to crush berries. Despite consuming berries on occasion, Rufflet is a true carnivore; it uses its talons to tear apart the hard shells of Shellders and other shelled prey before consuming the tender innards. Rufflet never backs down from a tough fight and will keep on fighting with bravery no matter how strong its opponent is. If it loses a fight, Rufflet will start to throw a tantrum.

Rufflet evolves into Braviary at level 54.

Rufflet is based on a bald eagle chick. His color palette also consists of red, white, and blue referencing the American Flag and concept of Unova (Unova is based on New York and is the first Pokémon region based on a US state). As opposed to Vullaby's influence being on pre-historic America, Rufflet seems to be based off the influence of modern America. The feather on his head resembles Native American headdress.

Rufflet's name seems to be a combination of the words "ruffle" or "ruffled" (referring to his feathers) and "eaglet".

His Japanese name 'Washibon' is possibly derived from 'Washi' meaning eagle in Japanese, or the Filipino word 'Haribon' known as Philippine Eagle meaning King of Birds. In addition it sounds phonetically similar to 'Washington'. 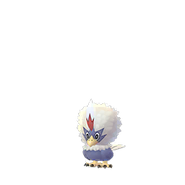