For the variant appearing in the games, see Brendan.

Ruby is the one of the main characters in Pokémon Adventures, so he is also a Pokédex Holder. His hometown is Goldenrod City. His birth date is July 2. His blood type is O. His skills lie in anything involved in sewing. His father is Norman, who is the Petalburg City Gym Leader. He has conquered all the Hoenn Region Pokémon Contests in under 80 days.

He is slightly tall for his age and lean with bright ruby red eyes, and wears a white and red hat over his hair. His real hair was revealed in the Ruby and Sapphire Arc, it is black and shiny with bangs that look similar to Norman's bangs when he was younger, and has a thin cowlick that sticks up like his mother. His hat covers his scar on his forehead that he got from a fight with a Salamence when he was younger.

In the beginning of the R/S arc, he wore a red and black long sleeved jacket, black baggy trousers with yellow cuffs, blue and yellow boots, blue and yellow fingerless gloves and a white hat that had a black band with a red logo. He also wore a yellow backpack.

In a flashback, as a younger boy, he is seen to wear a similar outfit to his original R/S outfit, with the jacket undone and the sleeves rolled up.

When he decided to fight Team Magma, he made himself a new outfit consisting of a short sleeved orange and black slim fit shirt, charcoal-gray trousers that look like shorts over sweatpants, orange, green and black flat slip-on shoes, and a white hat with a mint green colored band with a white logo. The sleeve on his shirt got ripped when the red orb traveled up his arm.

In the Emerald arc, he wore a red version of his second outfit.

In the OR/AS arc, he wears a red and black shirt sleeves slim fit shirt, black skinny fit knee length shorts with gray panels in places, white and green sneakers and a white hang with a black band with a scarlet arc logo on it. He also now has a mint green backpack. He has also grown his sideburns out.

Ruby is shown to be exceptionally good at creating clothes, and makes clothes for all his Pokémon to wear and even made Sapphire the clothes she usually wears in the manga. He is nearsighted (short sighted), and wears contacts to correct his eyesight, as he is too vain to wear glasses often. He also takes up photography as another hobby, and has a photo album of all his Pokémon's greatest moments like victories or evolutions. He is not shy to show off. He also lies to Sapphire saying that he is not powerful enough, but his secret is revealed later when he tries to save Sapphire from a Grumpig stampede.

Ruby can also be quite shallow and fussy at times, putting too much emphasis on physical appearances, shown when he at first rejected (multiple times) a Feebas because of its appearance, even though it had already taken a liking to him. However, he eventually made it a part of his team and named it Feefee, though he realized how selfish he was later and helped everyone in fighting against Team Aqua and Team Magma.

He loved to battle and was very mischievous, as seen in the R/S arc in a flashback.

For his love of Pokémon contests, he is given the title of "Charmer".

He was born in Goldenrod City, his father being Norman who was an aspiring gym leader. He met Sapphire only once, and they both had a lot of fun with each other, but their fun was soon interrupted by a Salamence. Ruby was able to knock out the Salamence with the Pokémon he had, but got his forehead split open in process.

This caused his father to fail the Gym Leader test at that time, because it was that Salamence that broke into Rayquaza's containment cell and broke it free. Sapphire ran off from the place they were in, crying, while Ruby decides that he had been too brutal and vowed to suppress his strength in a battle.

Over time, Ruby forgot the name and the face of the girl he once knew, although he still remembered her clearly.

He moved to the Hoenn region since his father could not stay with them in Johto. He first met Sapphire when they were young. Sapphire was unquestionably more feminine before, so he did not recognize her when they met later on at the beginning of the Ruby/Sapphire storyline, especially since he did not know her name. Sapphire was completely covered in a cloak of leaves when they met again, so Ruby thought she was a Pokémon. When she spoke, he got frightened and asked his Poochyena, Nana, to bite her. After settling things between them, they made a bet to return to the base Sapphire took him within 80 days after achieving their respective goals. In his case, he plans on getting all the ribbons from every Pokémon Contest category. He arrives in his first town, but only to have to rescue a boy, Wally, and to be almost caught by his dad, Norman.

After an incident, he was saved by a fisherman, who took him on a boat, and Ruby stating that he and the fisherman had no common interests (as the fish Pokémon that the fisherman had were all 'ugly' according to Ruby) and that he is sea sick, along with Coco, the Delcatty. Afterwards he lands and says thanks for the ride. He goes on and get contest ribbons but at the same time bumps to either team aqua or team magma. Later because of this Ruby's reflex battle came back and has shown his true strength to Sapphire to which Sapphire was angry about him lying about his strength.

Though Sapphire was grateful because Ruby could help but Ruby denied helping and she got angry at him. Ruby left and went to Lilycove City instead and took on the Beauty Contest to which he lost his Mimi (Feebas) because he shouted at it. Wallace commenting on what Ruby has done, he stated that he was selfish that's why Mimi left him, Ruby cried until he was unconscious. Later he agreed to help after thinking and both Sapphire and Ruby faced Team Aqua and Magma, though they were blown away by a huge explosion and was saved by Juan and they are now in Mirage Island. Then they were taught by Juan and Tate and Liza and they successfully mastered the orbs.

Afterwards, Sapphire confessed to Ruby. He stated that he was thankful for it and suddenly pushed Sapphire in the aircar, trapping her there. Ruby reveals that he always liked her from the very beginning. He then tried to stop Kyogre and Groudon, but was unsuccessful. However, with the help of Sapphire later he was able to, but the damage was done. Many people had died in the incident. Ruby then released his last Pokémon, Celebi and had it reverse time. Everyone who perished was shown to be alive. Afterwards they both made it with their bets and Sapphire asked if he remembered her confession in which he replied he didn't know what she was talking about. In the end, they both travel together.

Ruby and Sapphire reappeared again to help Emerald with capturing Jirachi and also they joined the tournament with Emerald. Though it was shown that he pretended again that he didn't remember anything about Sapphire's confession to him, they still quarrel just like the first time as shown when they first met Emerald. They were also kicked out of the match where Emerald is fighting against Dome Ace Tucker because Ruby and Sapphire were both noisy and Emerald stated that they should do their "lover's quarrel" somewhere else, because both of them were quarreling about that Ruby does remember everything that happened including Sapphire's confession.

Both Ruby and Sapphire with the help of Emerald, set free the other Pokédex Holders from them turning into stone. Throughout the chapter, they found out who Guile Hideout was, and it was none other than Archie which surprised both of them. They battled against him again along with all other Pokédex Holders and won. Later, they are surprised when Red said that they should hold a match and every Pokédex Holder will join. He loses at some point.

Ruby is a protagonist in the ORAS chapter. He is tasked with stopping a meteoroid capable of destroying Earth in 10 days, with the help of Mega Evolution. 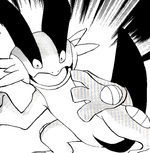 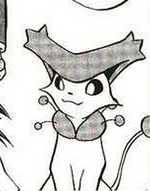 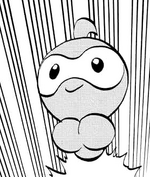 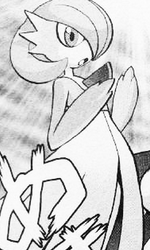 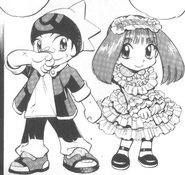 Ruby's outfit at the start of the manga chapters. 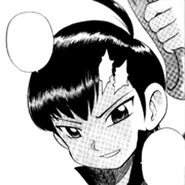 Ruby without his hat 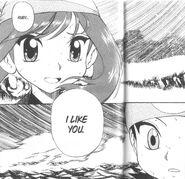 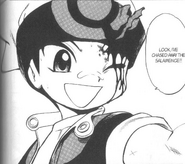 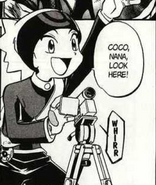 Ruby smiling at what he is seeing 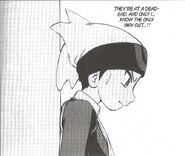 Ruby has a hard think 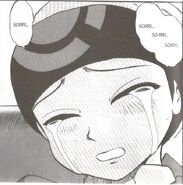 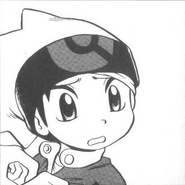 a younger Ruby with a bandaged head

Ruby in the Emerald Arc

The Pokédex Holders as they are surprised by what Red said.