Ruby & Sapphire Chapter is fifth Chapter (officially fourth) of Pokémon Adventures manga. It is based on the games, Ruby and Sapphire. It is consisted of eight volumes.

A young lad, who wishes to conquer all contests of Hoenn region, Ruby, arrives to Littleroot Town and sneaks out, away from his mother. On his first day he meets a wild girl named Sapphire, who wishes to obtain all Gym Badges. With this rivalry in mind, they start the bet at 80 days and have to return back to Littleroot Town with all badges or ribbons to win. While Ruby obtains a Mudkip and helps a fragile boy named Wally to catch his first Pokémon (as well as hiding away from his own father), Sapphire has a fight with strange people and manages to challenge her first Gym Leader, Roxanne.

The volume contains eleven chapters, of which ten are part of Ruby & Sapphire Chapter, from "Creeping Past Cacnea" to "Blowing Past Nosepass I". Ruby goes from Littleroot Town to Route 105.

While Sapphire manages to defeat Roxanne, Ruby is rescued by a sailor, Mr. Briney, who takes him (after an encounter with Crawdaunt) to Dewford Town. Through Ruby went to seChapterh for a Pokémon Mr. Briney told him about, he meets Steven, a collector of stones, who helps him defeat some Mawile and in the process, his Pokémon evolve. Sapphire, however, battles Brawly, a martial arts master. Sapphire, unfortunately, did not manage to give Steven the letter given by his father, so takes Ruby to get him. After an encounter with Team Magma admins, Tabitha and Courtney, at the Abandoned Ship, Ruby leaves Sapphire and goes to the Contest Hall, but is denied participation. He is soon captured by Team Magma and taken hostage, but manages to lure Blaise into the submarine.

The volume contains eleven chapters, from "Blowing Past Nosepass II" to "Slugging It Out with Slugma I". Ruby goes from Sea Route 105 to Slateport City.

While Sapphire meets up with Wattson and his friend, Trick Master, and solve a strange case of an underground city, Ruby, who has fought with Magma Admin Blaise, meets up with a swimmer, whose goal is to catch a Feebas. Ruby helps him, but the Feebas starts liking Ruby and protects him from a Zangoose and a Seviper. Just then, Ruby's father appears and has a battle with him. After the battle, both are rescued from danger and Norman leaves Ruby to win these Contests. Sapphire, however, goes to challenge Flannery, but instead helps her fight off the Team Aqua Admins, Matt, Shelly and Amber.

The volume contains thirteen chapters, from "Slugging It Out with Slugma II" to "Assaulted by Pelipper I". Ruby goes from Slateport City to the Weather Institute.

Sapphire and Flannery have lost the battle against the Team Aqua, but get unexpected help. Ruby, however, heads to Verdanturf Town and manages to win all Normal Rank Contests. He notices Wally among the audience, but that proves to be Wanda, Wally's cousin. Surprisingly, Team Magma grunts, led by Courtney, invade the Rusturf Tunnel, where Courtney asks Ruby to join them. Ruby leaves Courtney burned, declining the request and heads to Fallarbor Town, where he meets Wallace, who was supposed to be at the Gym Leaders meeting at Fortree City. Wallace, hearing Ruby is Norman's child, accepts his request to be Ruby's mentor and both head to Fortree City, where they meet Sapphire, who lost the Gym Battle against Winona,

The volume contains twelve chapters, from "Assaulted by Pelipper II" to "I Dare Ya, Altaria... Knock Chic off My Shoulder". Ruby goes from Verdanturf Town to Fortree City.

When Ruby is asked to participate in the fight against the threats of the Hoenn region, he declines, prompting Sapphire to brush him off. Ruby, stricken by this event, goes to Sootopolis City, which has been flooded. Meanwhile, Blaise of Team Magma manages to steal the Red and Blue Orb from Mt. Chimney, while his leader, Maxie, makes an alliance with Chapterhie, the leader of the opposing team, Team Aqua, as they both dive into the Cave of Origin with their trusted lieutenants. Chapterhie awakens Kyogre, unaware that Maxie managed to awaken Groudon and control both ancient Pokémon with the power of the orbs. Ruby, however, wakes up in a hospital, remembering he yelled at Feefee, who abandoned him after losing the Beauty Contest against Wallace. Seeing Sapphire caught a Relicanth, Ruby decides to help them out and teams up with Sapphire, as they dive to the Seafloor Cavern.

The volume contains twelve chapters, from "I'm Always Grumpig First Thing in the Morning I" to "The Beginning of the End with Kyogre & Groudon VI". Ruby goes from Fortree City to Route 123.

As Ruby and Sapphire dive to the Seafloor Cavern, the Gym Leaders face Kyogre and Groudon, but are stalled by Team Aqua and Magma admins. The Gym Leaders fight bravely, but Roxanne loses to Courtney and Wattson is thrown into ocean by Amber, who was actually betrayed by Chapterhie, after giving him the Blue Orb. Ruby and Sapphire fight the Team Magma and Aqua grunts and meet with the leaders, who are possessed by the Red and Blue Orbs. Ruby and Sapphire work together and defeat the leaders. However, Chapterhie and Maxie stand up and grab Ruby and Sapphire, then fly towards Sootopolis City, being possessed by Kyogre and Groudon, who will meet each other at the city for another battle. Wally, after rescuing Prof. Birch's Treecko, goes to the Sky Pillar. There he battles many Pokémon (causing Treecko to evolve into Grovyle) and reaches the top. This was all Norman's idea to train Wally for what is to come next. 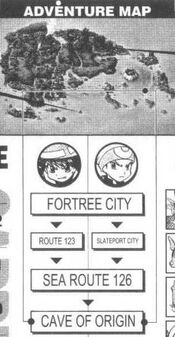 Maxie and Chapterhie drag Ruby and Sapphire to Sootopolis City, where Kyogre and Groudon battle. Just as they fell onto the field, Ruby and Sapphire are aided by Winona and Wallace, who help them in defeating these leaders. Using a piece of the Meteorite, acquired from Mt. Chimney, Sapphire and Ruby have it attacked and target Maxie and Chapterhie, who drop the Red and Blue Orbs. However, a blast causes Sapphire to reach Steven. Remembering Mr. Stone's favor, she gives him the letter, allowing Steven to awaken the Legendary Golems. After the blast, Sapphire and Ruby wake up at Mirage Island, where they train with Juan, Tate and Liza. As the Elite Four - Sidney, Glacia, Drake and Phoebe - with Steven and Wallace suppress the energy blast of Kyogre and Groudon, Ruby and Sapphire practice their skills with Plusle and Minun, they go out of the Mirage Island. Surprisingly, Sapphire confesses her feelings to Ruby, who traps her in Wallace's aircar. Wanting to protect Sapphire, Ruby goes into Sootopolis with Courtney instead.

The volume contains ten chapters, from "The Beginning of the End with Kyogre & Groudon XII" to "Rayquaza Redemption II". Ruby goes from Sootopolis City to Mirage Island. 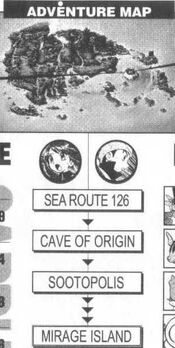 Ruby, along with Courtney uses the powers of Red and Blue Orbs to calm Kyogre and Groudon down. However, Groudon and Kyogre go on a rampage and as Ruby and Courtney seek shelter, Courtney gets dragged into the Cave of Origin. Norman and Rayquaza arrive and when Rayquaza battles the two ancient Pokémon, the Cave of Origin collapses, with Courtney inside. Ruby gets a message from Courtney his father actually left because Ruby, who battled a Salamence, accidentally set Rayquaza loose. After the battle, Norman and Steven collapse, due to the strain of controlling the two Pokémon. Wallace and Sapphire arrive and as Sapphire tends to Ruby, Wallace battles Maxie and Chapterhie, who took the Red and Blue Orbs. However, Wallace surrenders, as they have Winona as hostage. Just then, Ruby's Feebas arrives and Ruby places the Beauty Ribbon on her. Feefee evolves into a Milotic and, with the help of Tropius, Plusle and Minun, Ruby and Sapphire defeat Maxie and Chapterhie. To revert the events, Ruby releases Celebi, whom he caught in Johto. Celebi shatters the orbs and revives everyone. With the crisis solved, Ruby and Sapphire complete their bet of 80 days and go home to celebrate their birthdays. 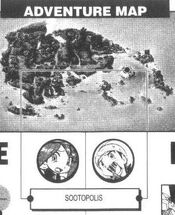