Roxie in other languages

Toxic Badge
Roxie is the Poison-type Gym Leader in Unova.

Punkish and rebellious, Roxie befits the stereotype of a typical Rocker. She is a passionate musician, who enjoys her band very much. Interestingly, her choice of Pokémon type suites various real life rock songs and themes for example "Poison" sung by famous singer, Alice Cooper.

She is shown to be rather determined and stubborn, as she was adamant in forcing her father to do his job as a sailor, and when she knew that he quit his sailor job to venture into Pokéstar Studios, she furiously blurted out "idiot" for eight times. However, she still cares for her father, as she comforted him after knowing that he was mocked by the audience for his movie.

The name Roxie comes from "rock", referring to the genre of music, and "toxic". 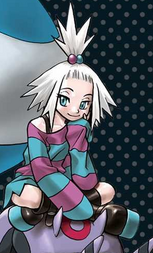 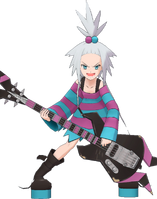 Roxie's VS. sprite in Black & White

Roxie's gym, reminiscent of a stage

Battling against Roxie
Community content is available under CC-BY-SA unless otherwise noted.
Advertisement