For the variant appearing in the games, see Roxanne.

Blowing Past Nosepass I

Roxanne is a character appearing in Pokémon Adventures, who is the Gym Leader of Rustboro City in the Hoenn region.

Roxanne is a girl with red eyes and brown hair, which is tied up into two pigtails with a red bow, with a small black U-stripe. Roxanne wears pink leggings and a small tie-like pink scarf around her neck.

She wears a white shirt with a purple school uniform dress and a pair of purple shoes.

She wears a grey school sleeveless uniform skirt with a rectangular print, which is white on the inside. Roxanne also wears a white undershirt, with short sleeves and a pair of black shoes.

Roxanne values knowledge and utilizes scientific facts in battles. However, this comes to a form of arrogance, to the point where she lets trainers take the test before she can judge them if they are good enough to battle her. She frowns on using brute force, and only resorts to such tactics if there are no options left. Though kind, Roxanne is slightly naive, as she joined the group supporting Team Aqua, simply because Professor Cozmo was seen with that organization. She doesn't like losing, and takes herself hard if she fails in certain tasks.

Sapphire thought of the Gym Leaders, including Roxanne, whom she had to battle against for the bet she had with Ruby.[1]

Roxanne appeared at the Rustboro City's Gym before Sapphire, who was surprised the Gym Leader was conducting a test. She then handed a test paper to Sapphire, who begrudgingly was forced to take the examination. Roxanne informed Sapphire that she couldn't face all of the Trainers, who wanted to battle her, so she held this examination to find the best Trainer to fight against. Later, Roxanne was shocked when Sapphire scored a perfect score in the test, asking whether she was related to Professor Birch. Sapphire confirmed this, to which Roxanne accepted her Gym Leader challenge. Roxanne outlined the rules for their battle, as the two Trainers released their Pokémon. When Sapphire's Aron attacked Roxanne's Nosepass with Metal Claw, it blocked the attack with Harden. Realising that she cannot win with Rono, Sapphire attempted to switch her Pokémon out, to which Roxanne outlined that her Nosepass' ability prevented the opposing Trainer from withdrawing their Pokémon.[2]

As the battle progressed, Roxanne was able to gain the upper hand, due to her Nosepass' ability. When Sapphire collapsed underneath a pile of broken rocks, Roxanne states that she had lost, since her Rono is unable to battle. However, Rono emerged from the rubble and took Nosepass off guard. Roxanne was surprised when she heard Sapphire explain how she bested Nosepass, through use of compass bearings. In honour of Sapphire's achievements, Roxanne presented her with the Stone Badge for defeating her.[3] Roxanne also wanted to explain more about the Gym Badges, but Sapphire was in a rush and sailed away on her Wailord. Roxanne shouted if one were to obtain all eight badges, they can enter the Hoenn League unconditionally and also hoped if Sapphire heard this sentence.[4] On Dewford Island, Sapphire explained to Mr. Briney the bet she had with Ruby and remembered battling Roxanne and her Nosepass.[5] Winona also warned Flannery about Sapphire, who defeated Roxanne, Brawly and Wattson.[6]

Later, Roxanne answered the call from Flannery for all Gym Leaders to assemble at Fortree City. Roxanne then arrived via her Graveler at Fortree City to attend the Gym Leader Conference alongside Brawly and Wattson. As the meeting adjourned, Flannery informed the Gym Leaders that Team Aqua was directly responsible for the attack on Mt. Chimney, to which Roxanne asks whether Professor Cozmo was among those present at Mt. Chimney. Flannery confirmed this, prompting Roxanne to announce her support for Team Aqua alongside Brawly and Wallace. This caused dissension between the attending Gym Leaders, as Norman announced that he did not support either team, much to Roxanne and the other's surprise. Norman began to leave the Tree Tower, as Roxanne comments upon his sheer arrogant nature. Flannery and Winona explain that their forces are insufficient to deal with the mounting threat, and suggest that they call upon the assistance of powerful Pokémon Trainers, which is lauded by Roxanne. She states that such Trainers would only get in their way.[7]

Later, when Winona brought Sapphire to Tree Tower, Roxanne and the other Gym Leaders approved of her decision to rally the Trainer's support.[8][9] Still, Roxanne and Brawly told Winona she made the decision of involving Sapphire in the fight without them. Roxanne also wondered where Tate and Liza were, who were also supposed to come to the meeting.[10] She and Brawly watched how Sapphire won the battle against Winona, who gave Sapphire the Feather Badge.[11] The Gym Leaders also watched as Kyogre resurfaced and started a tsunami, which flooded the cities.[12] The Pokémon Association director sent Roxanne and Brawly to deal with the areas affected by drought from Groudon.[13]

Roxanne went with Brawly to the place, where Groudon emerged from the ground. Winona contacted them, but the link was soon severed.[14] Groudon used Rock Slide to block their path. Brawly had his Machoke use Focus Punch, but Groudon immediately hit it away. Roxanne feared they weren't powerful enough to stop Groudon.[15] Winona also told Sapphire she hates it how the Gym Leaders were putting their lives at stake, while she and Sapphire were unable to do anything.[16] Roxanne managed to have her Nosepass use Block on Groudon, preventing it from moving any further. Next, Nosepass used Rock Blast, which hit Groudon. Roxanne admitted she had to attack recklessly, if it meant to stop Groudon, though she wasn't fond of that strategy. Soon, Wallace arrived to battle Groudon as well. However, they soon faced the Team Magma admins.[17]

Roxanne then faced off against Courtney, who took Roxanne to Lilycove City's tavern.[18] Roxanne was glad to see Brawly won the fight, though Courtney attacked her fiercely. Roxanne had her Cradily, who binded Courtney's Ninetales. Roxanne knew Courtney wanted to defeat her Nosepass to dispel Groudon's Block, thus she had Cradily bind itself to the floor and resist Ninetales' attacks. However, when Courtney threatened to kill the innocent civilians, Roxanne surrendered and let Ninetales defeat Nosepass, allowing Groudon to continue rampaging.[19] Courtney left Roxanne, who slammed her fist into the ground in frustration for letting Groudon continue onwards.[20] The word of Roxanne's defeat reached the Pokémon Association's director.[21]

Later, Roxanne was present when Ruby and Sapphire returned to the airship, and congratulated them upon their victory. After the crisis was over, she and Brawly were working together.[25]

Roxanne decided to help in the meteorite crisis and went with the Gym Leaders to Sootopolis City.[26] There, per Steven's orders, Roxanne launched an attack, which merged with others' attacks and shattered the meteorite.[27] 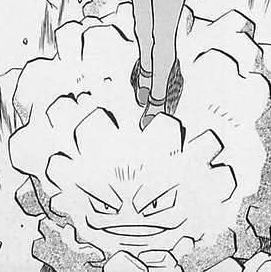 Roxanne's appearance in Ruby & Sapphire arc.
Add a photo to this gallery

Retrieved from "https://pokemon.fandom.com/wiki/Roxanne_(Adventures)?oldid=1240762"
Community content is available under CC-BY-SA unless otherwise noted.