Rowlet (モクロー Mokuroo) is a Grass/Flying-type Starter Pokémon of Alola region. It evolves into Dartrix.

Rowlet is a small, avian Pokémon resembling a young owl with a round body and short legs. Its plumage is primarily brown with a white underside and facial disc. The facial disc itself is in the shape of two overlapping circles. It has large black eyes and a stubby beak. The top part of its beak is white, while the lower half is an orange-brown. Its feet have two forward-facing toes and one backwards facing toe; they are the same color as the lower half of its beak. Two leaves sprout from its chest, arranged so that they resemble a bow tie. Additional leaves line the undersides of its wings and form its tail.

Due to its high resilience, Rowlet can face any situations. In addition, it is able to follow the instructions of its trainer and organizes different attacks according to different situations. A nocturnal Pokémon, it stores energy during the day through photosynthesis. It approaches opponents by silently gliding, before unleashing a volley of kicks. This Pokémon is able to rotate its head almost 180 degrees, and has excellent night vision.

Rowlet evolves into Dartrix at level 17 and then Decidueye at level 34.

Rowlet first appeared in First Catch in Alola, Ketchum-Style! under the ownership of Ash.

Rowlet is based on the barn owl; considering the Alola region's Hawaiian setting, it may also be based on the native pueo owl, where they are known to live in the forests and grasslands of the Hawaiian archipelago.

Rowlet's name comes from "ruffle" and "owlet", a baby owl. It may also come from "round" as it is very round, "arrow" or "rowan", a type of tree, because it is a Grass type. 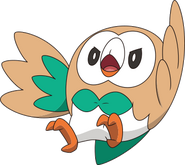 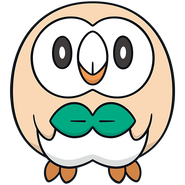 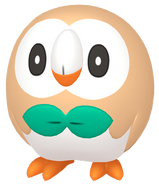 Add a photo to this gallery
← Volcanion | Rowlet | Dartrix →
Retrieved from "https://pokemon.fandom.com/wiki/Rowlet?oldid=1209568"
Community content is available under CC-BY-SA unless otherwise noted.