The Rotom Phone (スマホロトム Smartphone Rotom) is an electronic device found in Galar and is an enhanced version of the Pokédex. It appears in Pokémon Sword and Shield and its anime. Similar to the Rotom Pokédex in Alola, this Pokédex also has many features of its own.

The Rotom Phone's main function is to act as a menu in Pokémon Sword and Shield. This menu lists various functions such as the Pokédex, the player's current party, a town map, the player's bag, the player's League Card (as well as the ones they've collected), an options menu, and the ability to save the game. Along with these features, there are options for connecting online such as with the Victory Station and Mystery Gift icons. There is also the ability to set up Pokémon Camp, though this can only be done in certain areas in the game.

The Rotom Pokédex can also be attached to the Rotom Bike once the player obtains it. When attached, it will give the player a temporary speed boost in which they can travel faster, though a cooldown will start after using it. The player can tell when it recharges when the bike experiences a small shock as well as a shortened version of Rotom's cry playing.

The Rotom Phone first appear in Pokémon Journeys: The Series, where it serves as the main device to all Trainers. The Rotom Phone doesn't just act as a Pokédex to Trainers: they also have many other functions as well. The Rotom Phones can provide information about locations and landmarks, and vital information such as height. They have also been shown to have a numbered Pokémon list and are the first known anime Pokédexes to register and list caught Pokémon. The Rotom Phones also helps participants competing in the World Coronation Series meet each other and arrange for official battles and gives updates of the Trainers' latest rankings in the World Coronation Series. 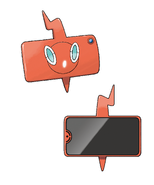 Add a photo to this gallery
Retrieved from "https://pokemon.fandom.com/wiki/Rotom_Phone?oldid=1346416"
Community content is available under CC-BY-SA unless otherwise noted.