Rotom (Japanese: ロトム Rotomu) is an Electric/Ghost-type Pokémon created by Team Galactic. Rotom can transform into various forms which resembles household appliances. Prior to Generation V, all of Rotom's forms shared the same Electric/Ghost typing as a normal Rotom before swapping the secondary Ghost type with another type.

Rotom is a small, round, ghostly creature with a plasma-based body. Its vibrant, orange body mass is spherical with a long, spike-shaped, antenna-like feature atop its head, and a small, round orb on its underside. It is enveloped in a glowing aura of cyan-bluish plasma, with lightning bolt-shaped appendages on either side of its lower body.

Rotom is very clever and mischievous. It enjoys teasing and frightening people and Pokémon. It often invades appliances and takes control of machines, allowing it to change its form.

It is said that a young male inventor's creation has caused Rotom's multiple forms to be developed.

Thanks to its plasma-composed body, Rotom is able to infiltrate electronic devices, namely appliances, and take control of machines. This allows it to change form, as well as its Ghost type. It can enter a lawn mower to assume its Mow Form, a microwave oven to assume its Heat Form, a refrigerator to assume its Frost Form, a washing machine to assume its Wash Form, and an electric fan to assume its Fan Form. Its “wings” also change for each form: clothes pins for Wash, oven mitts for Heat, splintered wood piece for Mow, lightning bolt for Frost, and wind current for Fan.

As of Generation V, Rotom changes its secondary typing depending on which form it takes: it becomes Electric/Water in its Wash form, Electric/Fire in its Heat form, Electric/Grass in its Mow form, Electric/Ice in its Frost form, and Electric/Flying in its Fan form.

As of Generation VII, Rotom can enter a PokéDex and transform itself into such a shape. This allows it to communicate with people and Pokémon alike.

As of Generation VIII, Rotom can enter a phone. This allows it to attach itself to objects, such as bikes, in order to upgrade them.

Each of Rotom's appliance forms possess elemental abilities that it uses for its mischievous pranks: Heat Rotom is able to manipulate fire with stylish flair and uses this ability for burning up clothing; Wash Rotom possesses water manipulation and can use it to flood rooms; Fan Rotom uses aerokinesis to blow away papers; Frost Rotom can spray cold air and can freeze any body of water, including a water-filled bathtub; and Mow Rotom is able to scatter any grass clippings, as well as slicing through flowers.

Rotom does not evolve.

Rotom is a Generation IV Pokémon, first appearing in the Pokémon Diamond and Pearl games. With the release of Pokémon Platinum, Rotom was given the ability to transform into 5 other forms with the aid of a special item. In Generation V, to change Rotom's form, you need to go to the basement of Shopping Mall Nine and interact with one of the many boxes of electronics, and choose a form. You will be asked to allow Rotom to forget a move and learn a move the type of the form it takes.

Rotom first appeared in the episode Get Your Rotom Running! and it was tricking and toying around with Ash and his friends.

In To Catch a Rotom!, Professor Oak caught a Rotom after saving it from Team Rocket and healing it.

Ash obtained a Rotom Pokedex in Loading the Dex!

Rotom may be based on a Poltergeist or related to the phrase "ghost in the machine". It may also be based on the Obake and the Tsukumogami, which are objects that become animate when reaching their 100th year of existence. Rotom may also be based on ball lightning and its mysterious and seemingly mischievous behavior. Ball lightning was once described as a living mythological "species of fire" known as ignis fatuus, which loosely translates to "foolish/mischievous fire". Due to its ability to possess electrical appliances, Rotom is based on the electric motor. Rotom also appears to resemble Pulseman, which was also designed by Ken Sugimori and can also enter electrical devices. As evidenced by changing its form in Pokémon Sword and Shield, it may also be based on a lightbulb.

Rotom's name is motor backwards. This is because of the fact that all of the household appliances it can turn into in battle have motors. It may also come from router and modem, both being devices capable of transferring data to other devices, similarly to how Rotom is able to transfer itself into appliances. 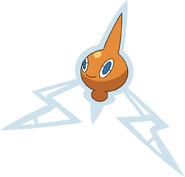 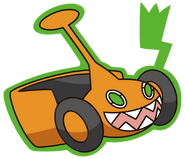 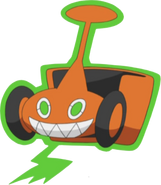 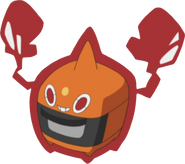 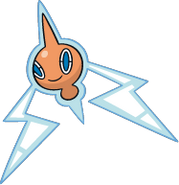 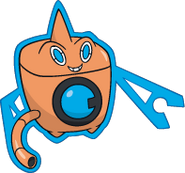 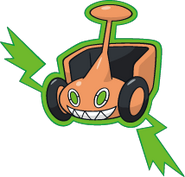 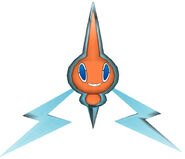 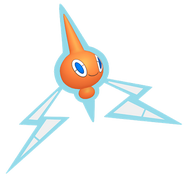 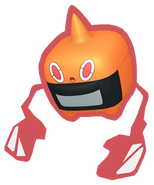 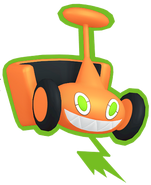 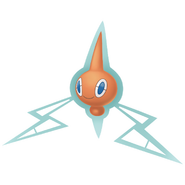 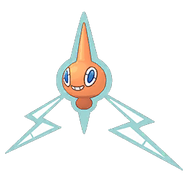 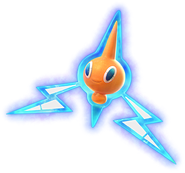