For the variant appearing in the games, see Roseanne.

Roseanne in other languages

Roseanne is a character appearing in Pokémon Adventures.

Roseanne took care of Professor Rowan's lab, in wake of his absence. However, she could not find the documents she placed few days ago. She walked out with her Dunsparce, to calm herself down. She noted despite the weather being cold, it looked beautiful, even poetic. As she was going to return to the lab, she encountered a swarm of Yanmega.[2]

Roseanne went into the lab to protect herself, as she was very scared of Bug-type Pokémon. Alas, she failed, and the Yanmega went into the lab. She called for help, but the Yanmega flapped their wings, which produced a sound that prevented her call for help. Instead, Roseanne switched the lights on and off, which gained the attention of Diamond and Sebastian, who immediately went to the lab. Roseanne met the two, but wondered who Diamond was. Diamond noticed a machine, and confirmed Sebastian's hunch, for these Yanmega have been sent by the villainous Team Galactic. Seeing Diamond was reading a book in the middle of the conflict, Roseanne became upset, but Sebastian calmed her down, which made her assume he was a strong trainer. Diamond explained Yanmega flapped their wings to produce shock waves, and showed a Pokédex, which made Roseanne realize he was the Pokédex Holder. Since they could not escape, Roseanne went into a hole that her Dunsparce dug out.[3]

Roseanne observed the Yanmega, and felt uneasy. She noticed Diamond's clothes, which had been cut, and assumed Yanmega could use Slash. Taking in consideration about the shock waves Diamond pointed out, Roseanne noticed that Weepinbell and Lax have been badly wounded, and noticed that Lax's Iron Ball was scratched up. Seeing that Yanmega could also produce internal wounds, she went to warn Diamond, but Yanmega started flapping their wings, so they could not communicate with each other. Fortunately, Diamond protected himself with Kit, who obtained the machine and destroyed it. The Yanmega became confused, and dispersed. Roseanne became surprised at their victory, and feared that Diamond and Kit got hurt. Diamond disagreed, and showed that his Kit had a Protector item, which defended the two from attacks. Roseanne became pleased, until she realized the Protector was the item that went missing from the lab, for Kit had stolen it. Still, she calmed down, since Diamond had saved her life. Since Diamond's clothes have been cut down, Roseanne looked as the boy went to Twinleaf Town.[4]

Sebastian and Roseanne went on the carriage to Twinleaf Town. Roseanne wanted to speak with Diamond, as she feared a great danger would threaten Sinnoh soon, considering what had happened last night. The two knocked on Diamond's door, but Diamond quickly rushed out before they could even react.[5] They went to Lake Verity, where they had a meal and discussed which course of action they should take next. Diamond decided to have them stay away at the carriage, while his Lax, under the guise of a wild Pokémon, would take Johanna to them.[6] Roseanne and Sebastian were waiting for Johanna, which made Sebastian fear that something had happened. When Johanna came to them, they quickly went on the carriage and rode away.[7]

Johanna, Sebastian and Roseanne went to Diamond's house. The trio was safe, but wondered what happened to Diamond. Johanna noticed that Diamond took the shoes and coat she had bought, to which Sebastian and Roseanne confirmed that he had visited the house. Johanna was pleased, for she placed a phone inside the coat, and went to call Diamond. Diamond picked up the phone, which made the trio happy that he was alive and well. Diamond apologized to his mother for risking his life, to which Johanna simply asked him to come home, where he'd have the berry grill. Diamond refused, and admitted while he was with Mesprit, whom he was trying to protect, he was stuck in Team Galactic's air shuttle, which shocked the trio.[8] The group listened to Diamond, who swore to defeat these villains, and that was the feeling he shared with them.[9] The trio encountered Pearl at Route 212. Showing Diamond's Kit and Tru, Pearl assumed that Diamond has gone missing. Sebastian and Roseanne explained that he wasn't missing, but his mother explained that Diamond was in the air shuttle, which went to Veilstone City, much to Pearl's shock.[10] Sebastian and Roseanne introduced themselves to Pearl, and observed him going to Veilstone City on the bike that Rad Rickshaw had repaired.[9]

When Diamond confronted Cyrus, he remembered Roseanne and the rest of the people he met on the journey. He remarked that the space he travelled over, and the time he spent with the people he met were valuable to him.[11]

Roseanne continued to serve as Professor Rowan's assistant, alongside the Berlitz family, after the Team Galactic conflict was over.[12]

Roseanne came to Mr. Berlitz and Moon, showing that the Rotom that Professor Kukui had requested has arrived.[13] 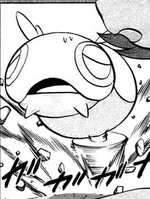