Rosa is a tall and slim young girl. She has very long dark brown hair tied in two large sock buns above her ears, with two long locks hanging loose to her waist, and shorter locks on either side of her face, pale peach skin and dark blue eyes. She wears a pink and white visor on her head, as well as a salmon pink tank top tied with a bow around her neck like a bikini top under a white quarter length slim fit top with ice blue sleeves and a fully salmon pink semi-Poké Ball printed on the chest area. On her bottom half, she wears frilly flared mustard yellow shorts over black lycra leggings with salmon pink socks. Her hi-top shoes are ice blue and white with mustard yellow laces. She carries a large salmon pink and white handbag with a black strap over her shoulder.

Rosa's personality is decided on the player in the game. However different portrayals of her appearance comes from the Pokémon manga and anime. In the anime, she is seen as confident and a powerful trainer whilst similarly, in the manga she is a trainer who struggles to hide her strength. 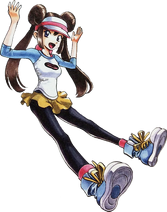 Rosa in the Black 2 and White 2 trailer (anime)

Rosa in the Masters trailer (anime) 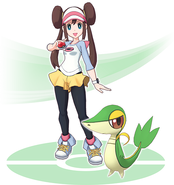 Add a photo to this gallery
Retrieved from "https://pokemon.fandom.com/wiki/Rosa_(game)?oldid=1361029"
Community content is available under CC-BY-SA unless otherwise noted.