Rookidee is a small avian Pokémon resembling a chickadee. Its face is covered by a black "mask" that extends into small protrusions on top of its eyes and beak and extends downward under its wings to divide the belly from the rest of its rounded body. Its eyes are red with no visible pupils and semicircle-shaped white markings underneath them. Its beak is short and gray, with the top half larger than the bottom half. Its back, tail, and wings are blue, while its belly is yellow. Its legs and feet are long and gray.

Rookidee are fierce and nimble, willing to stand up to opponents much larger than themselves, similarly to their real-world counterpart. these Pokémon learn to adapt their fighting styles to different situations. For instance, Rookidee will use their size and speed to their advantage against bulky opponents, nimbly hopping between their feet to attack weak spots and avoid lumbering strikes. With meeker foes, they will instead try to press the attack to keep them off-balance. They can be a bit too eager when they see supposed openings however, and will often fall for feints. This is perhaps the hardest lesson for them to learn, and trainers may notice their Rookidee making this mistake repeatedly through many battles. It is said that when Rookidee finally learn to be patient and think their opponents' strategies through, they are ready to evolve into Corvisquire.

Rookidee is likely based on a tit (in particular the Eurasian blue tit).

Rookidee is a combination of rook (a type of bird and a type of royal guard), rookie, kid, and chickadee. 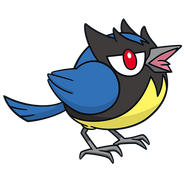