Rolycoly (タンドン, Tandon) is a Rock-type Pokémon introduced in Generation VIII. It evolves into Carkol at level 18 and into Coalossal at level 34.

Rolycoly uses its eye to illuminate the dark caverns it inhabits. The large piece of coal attached to Rolycoly's underside allows for better maneuverability over the roughest of terrains.

During the past 100 years, Rolycoly helped provide warmth for families living in Galar. Even in modern times, Rolycoly was used for camping outdoors.

Rolycoly has access to the unique ability Steam Engine, which increases Rolycoly's speed stat if hit by a Fire or Water-type attack.

It also has Heatproof, an ability that was originally exclusive to both Bronzor and Bronzong, which makes it take less damage from Fire-type attacks.

Rolycoly may be based on a coal-ore or cooled magma rocks. It also has some characteristics of a one-wheeled vehicle, such as the circular coal ore attached to Rolycoly's underside.

Rolycoly comes from roly-poly and coal. 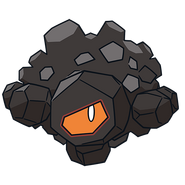 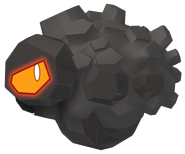