Rockruff is a small Pokémon that resembles a slightly plump dog. It has a fluffy tail, brown paws (with a small triangle on their end of the legs), a white neck decorated with brown fragments, a somewhat fatty beige underbelly, a brown mouth with a pink nose, two blue eyes and a pair of brown lowered ears. Ears are similar to those of a fox when they stand up.

Rockruff like to show their affection by hitting the rocks onto their Trainers. Unfortunately, this may make their Trainers feel painful. However, they usually become fierce during the time they grow older, and howl at evenings when they are going to evolve into Lycanroc. When they know that they will evolve, they might leave their Trainers for a while until their evolutions are completed.There are tales of it reuniting with its Trainer after becoming lost by following the faintest traces of scent. It has lived with humans since ancient times. Rockruff is often recommended as a good beginner due to its friendly nature. It can bond with Trainers easily. However, Rockruff is said to be a challenging Pokémon to raise, to the point where some Trainers abandon it due to being unable to handle it. This Pokémon is very sociable and will greet others by rubbing them with the rocks around its neck. Rockruff intimidates opponents by using the rocks on its neck to hit the ground. As mentioned in the anime, Rockruff trains itself by running around. It attacks foes the moment they flinch. It has been known to fight with Growlithe over territory.

If a Rockruff has Own Tempo as its Ability, it can also evolve into Lycanroc Dusk Form during the Evening Twilight time (7:00 p.m. to 8:00 p.m.)

Rockruff is based on a spitz dog (or a wolf puppy) and the extinct Japanese wolf, associated with rocks and mountains.

Rockruff is a portmanteau of rock, ruff (onomatopoeia for a dog barking), and rough (referring to the abrasive rocks around its neck). 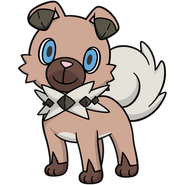 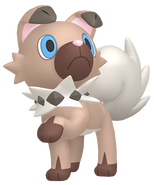 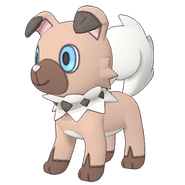 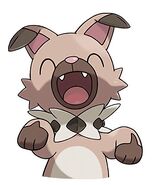 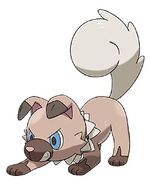 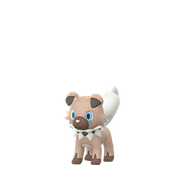