Call me Roark the Rock!

Roark serves as the Gym Leader for Oreburgh City's Gym and is the son of the Canalave City Gym Leader, Byron. Roark specializes in using Rock-type Pokémon and holds the Coal Badge for the trainers who defeat him.

Roark is a young man with red hair, who wears glasses. He wears a mining outfit, consisted of gray short-sleeved jacket and baggy pants with yellow/black outlines, which are tucked into his boots. The boots has red soles underneath them. He has a black tank underneath. Roark also wears white gloves with yellow outlines, and is usually seen with a red mining helmet.

Roark is a fair and reasonable trainer, with equal love and respect for all Pokémon. He has a father-son rivalry with his father, Byron of which he's determined to surpass him. However, with his inexperience, this feud still remains today.

The name Roark comes from "rock" and "ore".

His Japanese name, Hyōta, could come from 揚炭機 (yōtanki, coal unloader) and, following the plant-based naming of Gym Leaders, 瓢箪 (hyōtan, a type of gourd).

As a child, Roark used to spend his days on Iron Island.

Later, after Riley turned down the offer of becoming the next Gym Leader of the Oreburgh City Gym, Roark inherited the title from his father Byron as a result.

Roark is the Oreburgh City Gym Leader in Pokémon Diamond and Pearl. When he's not at the Gym, he is the Oreburgh Mine's safety supervisor. Roark's speciality is Rock-Type Pokémon. He also uses a Fossil Pokémon, Cranidos.

If a player defeats him they will obtain the Coal Badge and TM76 (Stealth Rock). The Coal Badge will also give the player the ability to use Rock Smash outside of a battle. 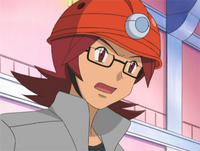 Roark in Pokémon the Series (anime) 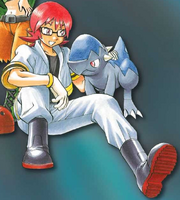 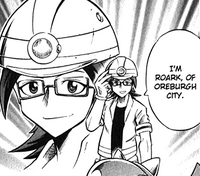