Riolu is a black and blue, dog-like Pokémon nearing two and a half feet. Its appearance is similar to its evolved form Lucario, though there are some differences. Its legs and torso are colored black while its head, lower body and tail are blue. Riolu have large, rounded bumps on the backs of its forepaws, placed in a similar fashion to Lucario's spikes. Riolu also have a black "mask" with two black appendages on either side, and red eyes.

Riolu are full of fun, energetic, and extraordinarily loyal Pokémon. Due to their extreme loyalty, some Riolu don't bond with just anyone, meaning despite patiently waiting for the right trainer they are known to be picky like Ash's Riolu. On the other hand, because of their type, they have extraordinary energy and endurance. They can also walk barefoot for a short time on a journey, and some of them can even run through the whole night or across canyons. Riolu are even to be able to react to aura from inside the egg before ever hatching and even emit it.

They only approve people who are kindhearted to befriend and mingle with them, while ones who are wicked will be forever despised and shunned by them.

Due to their extreme rarity, nobody knows their exact habitats, although it is mentioned that they live in seclude mountains, caves and groves. Some reside in the Lucario Kingdom where the chosen ones are being taught to use Aura to protect the kingdom before evolving and passing down the ability.

Riolu are mainly omnivores, but domesticated ones can eat human food.

Riolu are sensitive to a special type of energy called Aura as Lucario is. Riolu's evolved form, Lucario, can use these waves for attacks, tracking, or to predict future moves. However, Riolu does not have the full potential of these powers, using them as described in ripples rather than waves. Moves such as Aura Sphere can not be learned by Riolu due to its inability to fully use the power of Aura. There is at least one exception to this rule, however.

Despite these limitations, Riolu are good at sensing others' emotions from far away, and they can use this technique to call their allies for help when in danger or distress. Also due to their connections of the aura, they are able to sense the aura of others even before they hatch from an egg such as Ash's Riolu or when in suspension such as being petrified by Hunter J's tool as the Riolu that knows Aura Sphere. With their aura wielding, they can also discern the goodness or evilness within people.

Riolu evolves into Lucario when leveled up during the day with high friendship.

In the Pokémon Adventures manga, Maylene has a Riolu. It is seen using Drain Punch against Pearl's Monferno, who Platinum borrowed in order to fight her. Then, when Diamond's is traveling alone, he is given an egg by Riley, which eventually hatched into a Riolu. In Pokémon Diamond and Pearl Adventure! Hareta gained a Riolu egg in Serious Training on Iron Island which hatched into a Riolu later on in that chapter.

Riolu is based on jackals, especially the Egyptian god of death, Anubis. It also has some characteristics of tanukis.

Riolu's name is simply based on Lucario's name, switching "Rio" with "Lu" and leaving out "Ca". 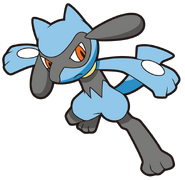 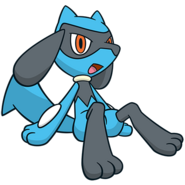 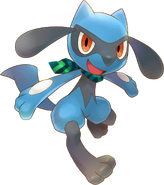 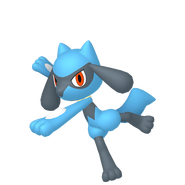 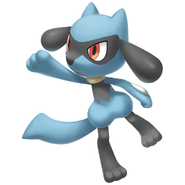 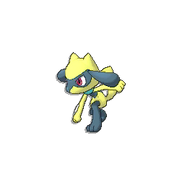 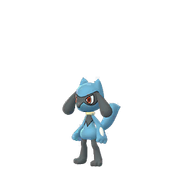