Trials of a Budding Master!

Rinto in other languages

Rinto is a character appearing in the Pokémon Journeys: The Series.

Rinto once again encountered Ash, who was with Goh and Farfetch'd, in the Vermilion City Pokémon Center. It was revealed that he had participated in the World Coronation Series, and he and Ash began an official match to settle with what happened since the last time they met. During the battle, Rinto and Gallade were at an advantage, and Gallade even managed to damage Farfetch'd's leek. After Gallade made Farfetch'd bump onto Ash, Rinto believed that Ash was going to give up, but Ash retained his faith for Farfetch'd, who started to gain an upper hand against Gallade. Just as Rinto was getting restless and impatient, Farfetch'd evolved into Sirfetch'd in front of his eyes, and he changed his attitude into a more respectful one toward Sirfetch'd. Although Rinto tried to turn the table around by letting Gallade activate his Justified Ability, he still lost to Ash and Sirfetch'd. After the battle, Rinto piggybacked his Gallade, and shook hands with Ash, while admitting that he still had a lot to learn. 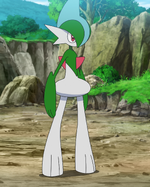 Rinto carrying his Gallade on his back