Rillaboom (ゴリランダー, Gorirandaa) is a Grass-type Pokémon that was introduced in Generation VIII.

Rillaboom is a large, bipedal Pokémon that resembles a gorilla. It has dark brown fur, an orange muzzle, leafy "hair," and a "belt" made of leaves. Its body is mostly dark brown with gray markings on its chest, hands, shoulders, and feet. Its hands and feet are a light gray-brown, with its wrists sporting green leaf-like protrusions. It carries two drumsticks and a wooden drum that it hides in its hair.

Its Gigantamax form is the same except its wooden drum became a full drum set. Four vines extend from its leafy hair and play the drums.

Rillaboom have a gentle nature and won't involve themselves in trivial fights. However, they are extremely sensitive to any actions that could risk the harmony around them, so they keep such actions strictly in check. Rillaboom have a strong sense of solidarity with others, and they will fight ferociously when their allies are in trouble. The Rillaboom who has displayed the best drumming technique becomes the leader.

Other Pokémon will congregate around performing Rillaboom to watch them drum and dance along. In Galarian folklore, it is said that as long as these Pokémon are drumming, the rules of nature are temporarily suspended, and predator and prey will dance together as companions. Trainers who prefer cooperation over competition and do not take life too seriously will find Rillaboom excellent companion Pokémon.

Gigantamax Rillaboom focuses completely on playing its drums, compelled by the power welling up inside it. The sound can reach across oceans and be heard by those living in other regions. It's said that those who hear the beat will begin to dance uncontrollably, overwhelmed by a rhythm that surges up from inside them.

In battle, Rillaboom unleashes powerful sound waves with its drum and throws opponents about by controlling the roots of its stump. The skills it honed while it was a Thwackey are put on full display.

When undergoing Gigantamax, Rillaboom's tree-stump drum grows rapidly— to the point that it now resembles a small forest on its own. Gigantamax Rillaboom merges with the forest of drums and becomes even more powerful. It can control its sticks as if they were its own limbs, and it demonstrates transcendental drumming techniques.

It is the final evolution of Grookey, evolving from Thwackey starting at level 35.

Rillaboom made its debut in PJ059 in Pokémon Journeys: The Series.

Rillaboom is based on a gorilla and a Taiko drummer, with its Gigantamax form more resembling a rock drummer kit. The fact that Rillaboom is a drummer is a reference to how real-world gorillas beat their chests when they're angry or acting territorial. It may also be a reference to the British rock band Gorillaz or the American rock band The Monkees. As Grass-type starters tend to be based on prehistoric animals, Rillaboom may also be based on Gigantopithecus.

As it's a gorilla-like Pokémon in a Nintendo-owned game that plays wooden drums, Rillaboom may also, to some degree, be based on the character Donkey Kong, who, throughout the various games in his series (many of which were developed by British game developer Rare), is associated with bongo drums.

The three fully evolved Starter Pokémon of Galar also each seem to represent a form of entertainment, with Rillaboom representing musical entertainment.

Rillaboom is a combination of gorilla and boom (referring to a sound of a drum). 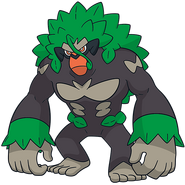 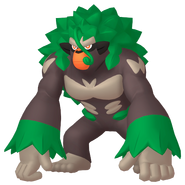 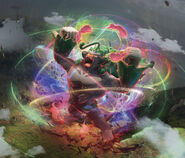