For the variant appearing in the games, see Riley.

Riley is a character appearing in Pokémon Adventures.

Riley was a friend to Byron from Canalave City.[1]

Riley was seen on one of the Seagallop ferries, sailing to the Battle Frontier.[2]

When the ship Diamond and the captain were on was going to crash into a rock, Riley, who was on a boat, had Lucario use Flash Cannon to shatter the rock. Riley met up with Diamond, and after introducing himself, asked Diamond to come with him to Iron Island.[3]

Riley went with Diamond to Iron Island for some special training. Riley sent Lucario against Diamond's Tru, Lax and Don. The trio defended themselves from Lucario's Close Combat and Aura Sphere, and attempted to attack by adding weight to Tru for its Wood Hammer attack. Lucario's Aura Sphere fell from the sky, and hit all of Diamond's Pokémon. Since Diamond's Pokémon became too exhausted, Riley declared he won the battle, and explained his Lucario has the power to sense aura in people and Pokémon, and is how he was able to predict Diamond's moves. He noted while Diamond's Pokémon had some impressive skills, they were still far too slow, and wanted Diamond to get rid of this hinderance. Thus, they went to a cave, where Riley stated Diamond had to reach a point inside the cave, through the course A, and quickly run back to the entrance. The trick was that many wild Pokémon were on the way, and nobody knew from where would they come out As Riley showed the path, the two were attacked by a Steelix: Diamond's Don quickly reacted to stop it. Riley was interested that Diamond reacted so quickly, but reminded him of Team Galactic's plans, and added that he needed at least three days before arriving to Lake Verity. Diamond explained the plan would be executed next Saturday, and Riley pushed him to do his best, since there was no time to lose.[4]

Riley urged Diamond to do his best. Diamond's Tru used Crunch on Steelix, to which Riley sensed while it could've used Earthquake, Diamond didn't want to hurt his other Pokémon. As Steelix toppled Tru away, it went away, to which Riley explained Diamond that it lost interest in fighting them. Riley showed Diamond to the final point of the cave. Over the next two days, Riley remained behind to wait for Diamond to complete the course four more times, and healed his Pokémon after doing so. Before they went to sleep, Diamond wsa making dinner. Riley noted Diamond's motivation rose up when he saw food. Moreover, he saw a journal, in which Diamond kept notes of their training. The two started eating, and Riley explained that this course was the best for Diamond to hone his skills. Diamond admitted he never got his Pokémon to deal the first strike, which made Riley think that increasing his Pokémon's speed would be difficult. At night, Diamond went to train a bit with Tru. Riley briefly observed this, and called Byron on the phone to tell him about Diamond. Riley thought he needed more practice, and decided to give him the graduation exam. The next day, Diamond was told about his graduation exam: to complete the course and find the egg that Riley placed in there. He warned Diamond he had to speed up, and prevent wild Pokémon from taking it. Just as Diamond went to the course, he was blocked by the Steelix he encountered few days ago, who was even attacked.[5]

Since Steelix was blocking their path, Riley went with Diamond, for Steelix was too violent to be disturbed, considering it could use Rock Polish. As they walked away, Riley thought what could've caused the incident, and Diamond explained he saw a shadow move. Riley was surprised, since he and Lucario could've sensed someone present with their aura. However, the two were attacked by two roughnecks, as their Vespiquen emitted honey to blind them, while Mothim used Air Slash around to prevent their auras from being detected - an aura seal. Riley was frustrated, as the two men even took the egg. Diamond stepped in, and had Tru use Razor Leaf. Riley thought this wasn't effective against the enemy, but realized Diamond was actually trying to gain speed, by firing one leaf. As Diamond did so, Vespiquen got hit and dropped the egg. As Mothim could not keep up with that, Lucario and Riley managed to sense the enemy's auras. Soon, Lucario defeated the two roughnecks, and Riley, who wiped off the honey from his eyes, tied them up to a barrel.[6]

Riley watched as the egg hatched into a Riolu. He cheered, and turned to the two roughnecks, who admitted they were paid millions of dollars to cause trouble on the island. Riley thought there was more trouble than they thought. He decided to have Diamond pass the graduation exam. He went to him, and told he grew stronger, and faster, and even showed courage when protecting the egg. Diamond thanked him, but thought he didn't need that, since he was being targeted by an enemy. Riley became shocked, but stopped, as he sensed someone spying on them. Diamond's Tru used Razor Leaf, which struck a machine: a camera, which the enemy was observing them. Diamond told Riley he saw this camera before, and it was used to have the enemy learn of their tactics. Riley smiled, seeing Diamond did have more insight than he believed. Suddenly, Diamond lost balance and crashed into Byron's house. Riley was shocked, but Diamond found an item that Byron told him to obtain. Without further ado, Riley prayed that Diamond protects Lake Verity, and bid him farewell, as he departed off on the ship. Riley remained behind and looked at the machine, seeing a Team Galactic grunt's face. Riley felt a lot of malice from that person, who must've employed the two roughnecks.[7]

Riley and Lucario encountered Sird atop the Spear Pillar. Riley remarked that the person that controlled the grunt was Sird, who appeared on the machine. To fight her, Riley had Lucario attack her Starmie with Close Combat and Aura Sphere.[8] Later, Lucario appeared with Riley, and used Bonemerang on Palmer at the Battle Zone. Palmer caught the bone, and was pleasantly surprised to see them.[9]

When Diamond confronted Cyrus, he remembered Riley and the rest of the people he met on the journey. He remarked that the space he travelled over, and the time he spent with the people he met were valuable to him.[10]

At the Battle Zone, and Riley's Lucario fling a bone at Palmer. Palmer commented that was Bonemerang and caught the bone, then welcomed Riley and Lucario. Riley noted that the Battle Zone facilities was a bit more impressive than the ones at Hoenn, which he had visited. Palmer thanked him, and noted Riley recently had a hard time. Riley looked at the broken machine, and stated he had no clues on how to find the enemy. However, Palmer added that he knew someone that could repair it, but before that, he had the Battle Zone opened for hundreds of trainers that went inside.[9] The two helped Palmer and Argenta investigate the communications systems. Palmer and Argenta noticed that Thorton's machine didn't interfere with the communications systems. Riley, however, sensed a force outside the Battle Frontier, and mused it was very much like the one at Spear Pillar.[11]

Riley and Lucario, along with Darach and Thorton, awaited Palmer and Platinum. The two came to help protect the Sinnoh Battle Frontier, and was why they gave the machine they found to Thorton to repair it. Palmer explained they all had been inspired by Platinum's determination, and decided to work together on saving the Battle Frontier. He also admitted that it was Riley that informed him of Platinum and her friends' adventures, among them being his son, Pearl.[1]

With the machine fixed, Riley decided to pitch in his support by having the electromagnetic fields cleared, so the machine could fly off to its owner, and they could trace it down. With the group assembled, they met up with Platinum outside the Battle Tower. Riley, along with Lucario and Riolu, used their aura to clear the electromagnetic fields. Riley went after the machine, while the rest of the group followed him on Cresselia.[12] Riley, sailing on the boat with Mira and Cheryl, had Lucario and Riolu navigate the way the machine was going to.[13] Riley's Lucario and Riolu led the way to the Spring Path, to the Sendoff Spring. Once there, Riolu sensed something from the Turnback Cave. Much to their shock, the group saw Marley being captured by the Team Galactic grunt. However, the latter released her, and explained he defecated from Team Galactic, and felt that Marley was a hitman trying to take him out. Riley sensed his aura, seeing the man told the truth, for he was quite frightened. Thus, the man promised to take the group to the portal to the Distortion World.[14]

The former Team Galactic grunt took them to the portal. Riley crossed through, and got separated from others. In fact, he had a bit of trouble walking in the world.[15] Riley managed to regain his stance, and return to the group, where he saw the Legendary Pokémon battle each other. As Regigigas fell down, Riley saved Marley from getting crushed.[16] Riley emerged from the Distortion World at Sunyshore City. He, Palmer and the former grunt watched as Darkrai flew away, and hoped that it would find peace, due to its power to cause everyone nearby nightmares.[17] 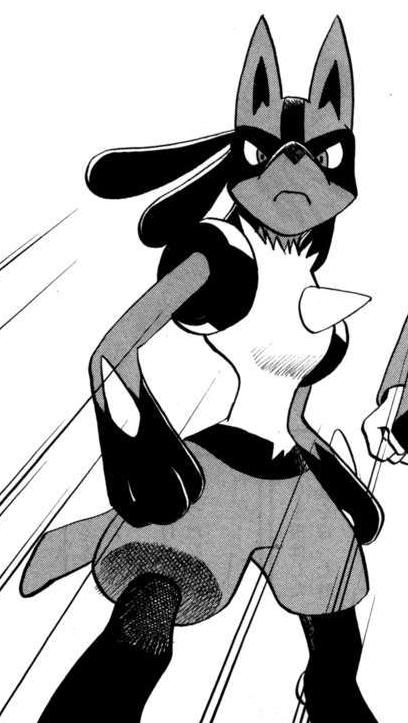 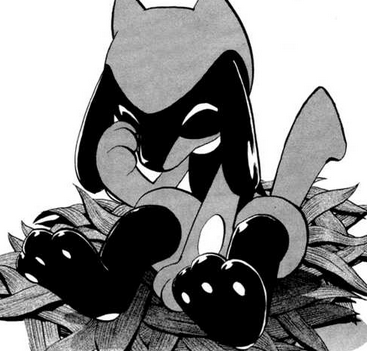 Retrieved from "https://pokemon.fandom.com/wiki/Riley_(Adventures)?oldid=1224611"
Community content is available under CC-BY-SA unless otherwise noted.