Outside of Pokémon, Rica has had roles in series' such as Outlaw Star, Yu-Gi-Oh, Naruto, and the Super Robot Wars series of games. She's also been a member of the singing group JAM Project, and did work in the Japanese dubs of Super Robot Monkey Team Hyperforce Go! and The Little Mermaid. She is also the voice actress for Arthur G6 in her first voice acting role in the Super Sentai Series, Chikyuu Sentai Fiveman.

She specializes in singing anime songs and has performed numerous opening themes for the Japanese version of the Pokémon anime. Furthermore, her singing ability also brings another album outside Pokémon anime, "Alive a Life" (2002) and "Go! Now! ~Alive A life neo~" (2019) for a Kamen Rider Series theme, Kamen Rider Ryuki. 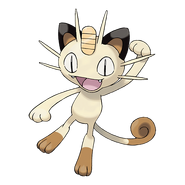 Ash Ketchum
Add a photo to this gallery
Retrieved from "https://pokemon.fandom.com/wiki/Rica_Matsumoto?oldid=1422034"
Community content is available under CC-BY-SA unless otherwise noted.