Ribombee is based on a butterfly. But rather shares traits of the Bee Fly. It's Fairy-typing brings fairies and sprites in mind.

Ribombee's name is a combination of "ribbon" referring to its clothing like fuzz, "bombyliidae" a species of insect also known as the "bee fly", and "bee" due to its process of pollination and small appearance. 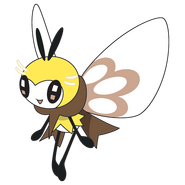 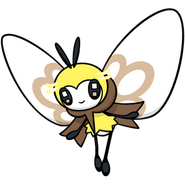 Add a photo to this gallery
← Cutiefly | Ribombee | Rockruff →
Retrieved from "https://pokemon.fandom.com/wiki/Ribombee?oldid=1019924"
Community content is available under CC-BY-SA unless otherwise noted.