Reshiram (レシラム, Reshiramu) is a Dragon/Fire-type Legendary Pokémon introduced in Generation V. It is the mascot for Pokémon Black. It is part of the Tao Trio, along with Zekrom and Kyurem.

Reshiram is a large, white draconian Pokémon that represents truth (while its counterpart, Zekrom, represents ideals). Reshiram has a slightly mammalian-looking face that resembles that of a white lion. It has a great wispy flowing mane of white feathery fur surrounding its head, striking blue eyes, and several silvery-white rings around its thin, swan-like neck. It has a large cylindrical torch-like tail which functions as a powerful fiery engine. It has with a single silvery band around each of its hands, which are attached to its wings. Its arms are attached to its wings, which are vast, white and feathery. Its chest feathers resemble the design of the Silver Wing. The lower portion of its body protrudes outward to a point. It has a round belly and thick, powerfully-built legs with three claws on each foot, and a single claw on the back of each foot.

Reshiram does not evolve.

Reshiram, when paired with Zekrom, may be based on yin and yang, a concept originating in Chinese philosophy. Yin and yang are intended to represent dualism, which can be seen in the design of Reshiram which has a lighter, feminine, more natural appearance in contrast to Zekrom's darker, masculine, and more industrial appearance. It may also be based on deities in Zoroastrianism, two of which are depicted as equally powerful, though they represent different powers and values, with Reshiram being based on Ahura Mazda, who was associated with fire, light, and truth. Physically, Reshiram overall seems to resemble a dragon or bird.

Reshiram comes from shiro (Japanese for "white"). Re was also used in its name as it sounds softer compared to the Ze in Zekrom's name. This was done due to Reshiram being considered a less physically powered Pokémon. 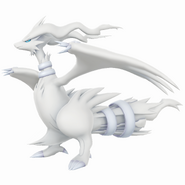 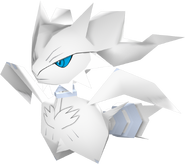 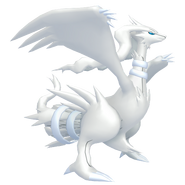 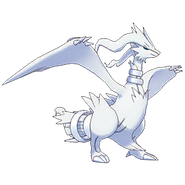 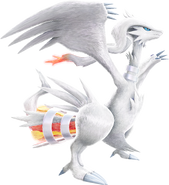 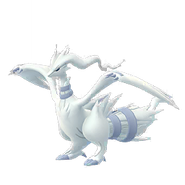 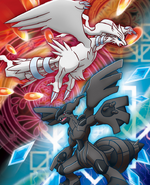 Reshiram and Zekrom representing the concept of Yin and Yang