Rescue Team Camps (キャンプ, Resuce Team Camp), formerly called Friend Areas (ともだちエリア, Friend Area), are locations in Pokémon Mystery Dungeon: Red Rescue Team and Blue Rescue Team and Pokémon Mystery Dungeon Rescue Team DX. Pokémon recruited to rescue teams can settle in their respective camps, but some locations have to be unlocked by the player character in different ways, such as completing certain missions, completing story elements, or buying them from the Wigglytuff's Camp Corner. There are 27 locations for rescue team camps, some having subsections for various types of Pokémon.

Rescue Team Camps are split up into different locations. Each location may have more than one rescue team camps.

Below is the map of Friend Area in Red Rescue Team and Blue Rescue Team. Click on the dots to navigate. 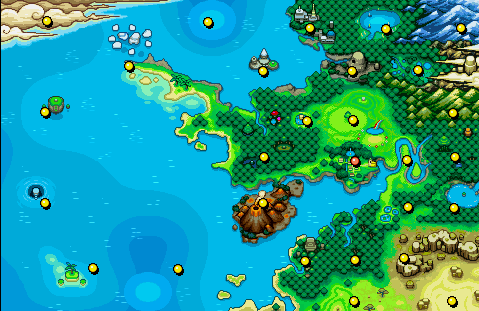