Regigigas (Japanese: レジギガス Rejigigasu) is a Normal-type Legendary Pokémon. Regigigas is the Master of the Legendary Titans (the Hoenn Trios Regice, Registeel, and Regirock and the Galar Duos Regieleki and Regidrago). At first, it only awakens when all three Hoenn Titans are present in the player's party but until Galar was opened, it can now be awoken when all 5 of its creations are in the player's party.

Regigigas is a very large Pokémon that bears a similar resemblance to the original three Regi Pokémon. Primarily white, Regigigas have a few black stripes located on their body and yellow plates surrounding their wrists, shoulders, and another in their upper region. Around its feet and its back, Regigigas have some kind of plant or moss growing on it. It has a very large physique with long arms, short legs and no visible neck or head. Unlike the other Regi Pokémon, Regigigas have no specific element that they relate to. Instead, they have two sets of three gemstones, with a set representing Regice, Registeel and Regirock.

In Sinnohan mythology, Regigigas towed the continents into their current arrangement using nothing more than rope. It is thought to communicate via both telepathy and the flashing lights on its head. According to legend, Regigigas crafted three Pokémon in its likeness out of clay, ice, and magma. The three beings were entirely subservient to Regigigas and would obey its commands above all else. Along with its servants, Regigigas stopped a volcanic eruption in the area now known as Snowpoint City, Sinnoh. After that, it began a centuries-long slumber deep within Snowpoint Temple, sending its servants to a distant region (Hoenn). It is said that anyone seeking to awaken this Pokémon would need to bring its three guardians to it first.

Regigigas is believed to be tremendously durable, capable of traveling through practically any terrain and withstanding temperatures both as low as -328 °F (-200 °C) and as high as 2,400 °F (1,300 °C). Some say that Regigigas will shoot beams out of its eyes at anyone attempting to awaken it without bringing its guardians.

Regigigas does not evolve.

This creature is the master of Hoenn's Legendary Regis. It remains dormant in Snowpoint Temple until the player arrives with Regirock, Regice, and Registeel in their party.

There is only one that can be found in the Generation IV games. It can only be awakened and caught in the basement of the Snowpoint Temple when the player has the other members of the Regi family in their party. (The only way to acquire the other three Regi Pokémon in Generation IV is to beat the Elite Four, and migrate them into Pal Park.) There was also a Pokémon Diamond and Pearl event in which you could obtain Regigigas. In the Platinum version, there is a special event where you can find the other three Regis using the event Regigigas only. Regice is located in Mt. Coronet (near Route 216), Registeel on the B3F of Iron Island and Regirock is located on Route 228. When you caught all three, go back to Snowpoint Temple and battle it (It is encountered at Lv. 1). This is the best way to get it in Platinum.

Regigigas made an appearance in the 11th Pokémon Movie, Giratina and the Sky Warrior. It awoke from its temple and, along with a herd of Mamoswine, it helped hold back a glacier Zero had broken to destroy the Gracidea Garden. After the glacier's foundation in the Reverse World was restored, Regigigas went back to its temple.

A Regigigas also appeared in Pillars of Friendship. It was asleep in the Snowpoint Temple until Pokémon J provoked it into a frenzied rage so she could capture it for one of her clients. It then gained control over Pyramid King Brandon's Regirock, Regice, and Registeel to use as bodyguards. After its rage was finally calmed, it released its control over Brandon's Regis and went back to sleep.

A Regigigas appeared briefly in the 18th movie,Hoopa and the Clash of Ages, in which it was summoned to ancient Dahara City along with Zekrom and Reshiram by Hoopa, who sought to challenge them and prove its strength.

Just as Diamond is about to jump to the hole to the other universe, Regigigas came out and stopped him. In Pokémon Diamond and Pearl Adventure!, Hareta catches a Regigigas in the 4th Book to battle Team Galactic.

Regigigas is based on the Golems described in Hebrew legend. These legends depict them as servants of higher powers, and are also said to have writing on their heads. When this writing is removed, the beast would be weakened.

Regigigas's is a combination of the words "Regi", the Esperanto word to rule, to reign, to govern, to control, combined with the word, "gigas", meaning giant. Therefore, a rough translation could mean "King of the Giants", as it needs to get the other "Regis" to awaken this. 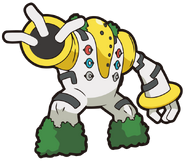 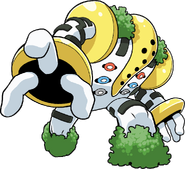 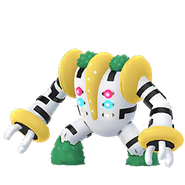 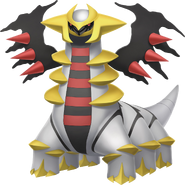 Regigigas within the Snowpoint Temple.