Undiscovered
Regieleki (レジエレキ, Rejiereki) is an Electric-type Legendary Pokémon introduced in Generation VIII, included in Pokémon Sword and Shield Expansion Pass. It, along with Regirock, Regice, Registeel, and Regidrago, is part of the Regi quintet (sextet if one counts Regigigas).

Regieleki is a yellow bipedal Pokémon that appears to be made of electricity. It has two short, lightning bolt-shaped legs, two big, somewhat cylindrical arms that can open up, seven pinkish dots on its face arranged in a sort of "X" pattern, three spikes on its head, and blue rings, thought to be insulators, separating its head from its arms and legs.

This Pokémon absorbs electrons to live, as electrical energy makes up most of its body.

Some researchers theorize that, in ancient times, people that were tormented by Regieleki fitted the blue rings on it to restrain its powers.

Regieleki is capable of generating the entire Galar region's electricity, and its Electric-type moves are said to pack the greatest power of any moves used by Electric-type Pokémon. It is said that its hidden power will be unleashed by removing the insulators.

Regieleki has a base speed stats of 200, which is the fastest among all Pokémon as of Generation VIII.

Regieleki is only obtainable in The Crown Tundra expansion pass. Regieleki is found in Split-Decision Ruins, where the player has to make a decision either to encounter Regieleki or Regidrago.

Regieleki is based on a golem, an artificial creature from Hebrew legend given life through the writing on its head, much like the other Regis. It also has elements of a light bulb and Tesla coils. Its restraints imply it is a personified electrical current wrapped in insulation.

It may also draw inspiration from the Current War between Thomas Edison (Direct Current) and Nikola Tesla (Alternating Current), since its body appears to be based on both of their inventions.

Its signature move is likely based on the Faraday Cage, which is supposed to shield whatever is inside from electromagnetic waves.

Regieleki and Rejiereki come from regis (Latin for "royal") and "electricity". 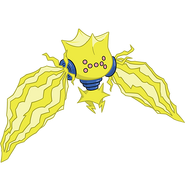 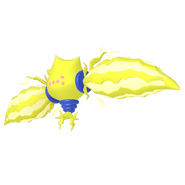 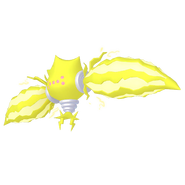